Let Me In - By Michelle Lynn 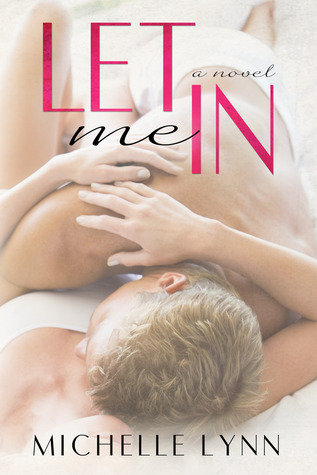 **This is a STANDALONE! You do not need to read book 1 in order to enjoy LET ME IN ***
Grant is damaged, selfish, and undeserving of love…or so he thinks.
Jessa is happy, in love, and has overcome her past…or so she thinks.
Grant and Jessa can’t stop thinking about one another since being introduced at a party a month ago. And despite their differences, they can’t seem to stay away from each other either. However, both are hiding secrets of less-than-perfect pasts, fearing what will happen when those mistakes come to light. As they grow closer, they each battle their own insecurities, and neither believes that they are worthy of the kind of love that they both still want. So if it’s true that opposites attract, what happens when the similarities begin to surface?

Melinda's Review:
This is the second book in The Invisibles Series.  I thought Brady was great and I knew there was something about Grant but man he is something special.  I had to have a box of tissues handy for this one.  It tugged at my heartstrings so many times.  Jessa and Grant are both broken in different ways but they are so right for each other even if neither one believes they deserve the other.

Grant does not want a relationship or to fall in love because everyone he has loved has ended up leaving him in some way.  Jessa believes she is finally over the betrayal of an ex-boyfriend and has been dating Rob.  There are feeling between Jessa and Grant but Grant refuses to act on them because of Rob, even if he is a DB.  Finally Jessa see’s the light with Rob breaks it off and goes looking for Grant (insert happy dance).

It isn’t all rainbows and fairytales for Grant and Jessa they both have to let go of their past (insert box of tissues and me wanting to crawl in the book to cuddle with them both when they tell their stories).  I love it when Jessa stands up to Emily and tells her why she is waiting outside Grants bedroom and Grant enjoyed hearing what she had to say too I might add.  I love the brother/sister type relationship that Trey and Jessa end up having.  I also enjoyed that you see some of the same people from Don’t Let Go besides the guys and Sadie.  We are also introduced to Jessa’s parents and Sister, Sam, which I enjoyed reading the interactions of all three with the guys Sadie and Jessa.

There are so many good parts to this book the visions Grant has of Jessa, the ski trip to Colorado, and the letters were a killer for me. You can see there is something between these two from the moment they meet in Don’t Let Go and it grows and grows from there.  For two soles who have lost so much they can really love one another. I loved the Pictionary scene and yes the four guys playing volleyball with their shirts off would have won right away.  LOL

After reading about Brady and Grant I loved them both each holding special qualities.  However, now that I know a little more about Trey and Dex I really need to know their stories. After reading the epilogue, which I’m a huge sucker for, I so hope Trey gets the HEA he deserves.   I think Trey is going to take the cake but there is something about Dex that’s telling me he may be the best of all.

Here are a few of my favorites:

I love the way her small frame wraps perfectly around me, almost as if were built to fit together like a puzzle. The thought that I found my final puzzle piece to make me whole, alarms me to no end. ~Grant

You have no idea how you look in my eyes, do you? It’s not just your looks Jessa. You’re the most beautiful thing I’ve ever seen. It pours out of you when you walk into the room. People can’t help but notice you. ~Grant

“It’s not your hair, your tattoos, or your piercings. You have such a big heart and you love so easily. I’m envious. I didn’t fall in love with the way you look; I fell in love with the part of you.” I moved my hand over her heart. ~Grant.

About the Author:
Michelle Lynn has always been a reader, but her passion has become a full-blown addiction since her husband bought her a Kindle for Mother's Day. She's pretty sure that he regrets this on a regular basis. Especially when she has it propped up next to the stove while she cooks, which often results in a burnt dinner. Or when he loses sleep because the glow from the screen wakes him up when he rolls over at three in the morning. He does agree, however, that she uses this gift more than any other he has ever gotten her. She joking counters that, because of some of the steamy novels she reads, he also benefits more from this gift than any other he has gotten her. ;)

Michelle moved around the Midwest most of her life, transferring from school to school before settling down in the outskirts of Chicago ten years ago, where she now resides with her husband and two kids. She developed a love of reading at a young age, which helped lay the foundation for her passion to write. With the encouragement of her family, she finally sat down and wrote one of the many stories that have been floating around in her head. When she isn’t reading or writing, she can be found playing with her kids, talking to her mom on the phone, or hanging out with her family and friends. But after chasing around twin preschoolers all day, she always cherishes her relaxation time after putting the kids to bed.