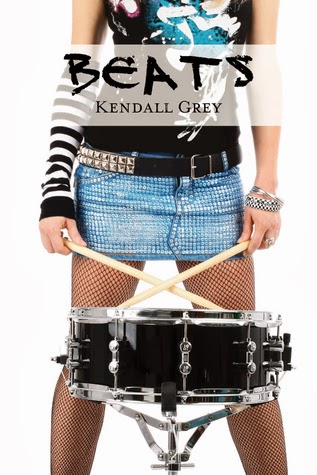 For months, shy drummer Jinx Hardwick has been silently crushing on her tall, dark, and scary bandmate, Toombs Badcock. Drawn to his frightening ink and scars, she yearns to uncover the shadowy secrets lurking behind his silver eyes, but Jinx is too intimidated to even look at him, let alone talk to him. When she stumbles upon Toombs and their manipulative lead guitarist Rax in a compromising position, Jinx realizes her chances of winning Toombs's heart aren't just a long shot--they're nonexistent. To make matters worse, Jinx's family needs her at home. She's about to back away from it all--Toombs, the band, her dreams of fame and fortune--when Rax makes her an offer she can't refuse: a no-holds-barred night alone with Toombs. There's one small catch. She has to go through Rax to get it.

This is the second book in the Hard Rock Harlots series and I am in love. I was intrigued by Toombs in Strings and was so happy to read this book, that I dove in right after reading the first one.

Now we all know that Angie J loves Toombs but I'm sorry, FS, I will fight you for him. Lol! Okay, now for my review.

One thing I absolutely loved about this book, is that whenever the band practiced, I felt like I was there. I could see what they were doing, feel what they were feeling and although I don't know much about music, I felt like I could hear it as well. I remember thinking that I wish I could have listened to the band play in real life or that they were an actual real live band. I would be their #1 fan! A heavy metal band with 3 hot guys and 2 hot girls? You don't have that. Like at all.

Now Rax...oh my gosh. In Strings, he was a douchemonkey but not too bad. Well in Beats? Holy balls batman. But apart of me loved him also. I was drawn to him even when he treated Toombs the way he did. It broke my heart seeing what Toombs went through with him but I understood it as well. But I love Jinx and what she did for Toombs. Even though she wasn't a huge fan of Rax herself, you could tell that she was taken by him. Rax is like a drug. You know it's bad for you, you know it could destroy you. You know you shouldn't take it but you enjoy the high you got afterwards. You craved it. That's how I feel about Rax.

Jinx. Love her. Love what she did for Toombs. Love how she became all Domme. Toombs needed that and needed her and they fit perfectly together.

I also enjoyed seeing the other characters, Letty and Shades. Letty is funny as ever. Her one liners kill me. And Shades? Well he's just hot.

I don't know what else I can say about this book other then read it! It definitely has it's hot, I mean, really smoking panty melting hot moments but it also has it's sweet side. Probably one of my favorite books of 2013!

Great job, Kendall and I can't wait to read Nocturnes! 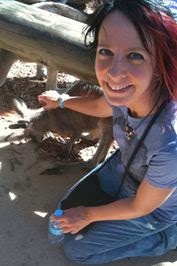 Kendall Grey, word wrangler, whale warrior, wicked wench, and lover of tongue-tripping alliteration, was born without an off-switch between her brain and mouth. She's been called the "Flux Capacitor of Twitter" (@kendallgrey1) and "A little package of love all wrapped up in F-word paper," but she's really just a maniacal writer relaying eyewitness accounts of the rave inside her head. She writes urban fantasy with strong romantic elements and also dabbles in erotica and horror on occasion.

Kendall lives off a dirt road near Atlanta, Georgia, but don't hold that against her.