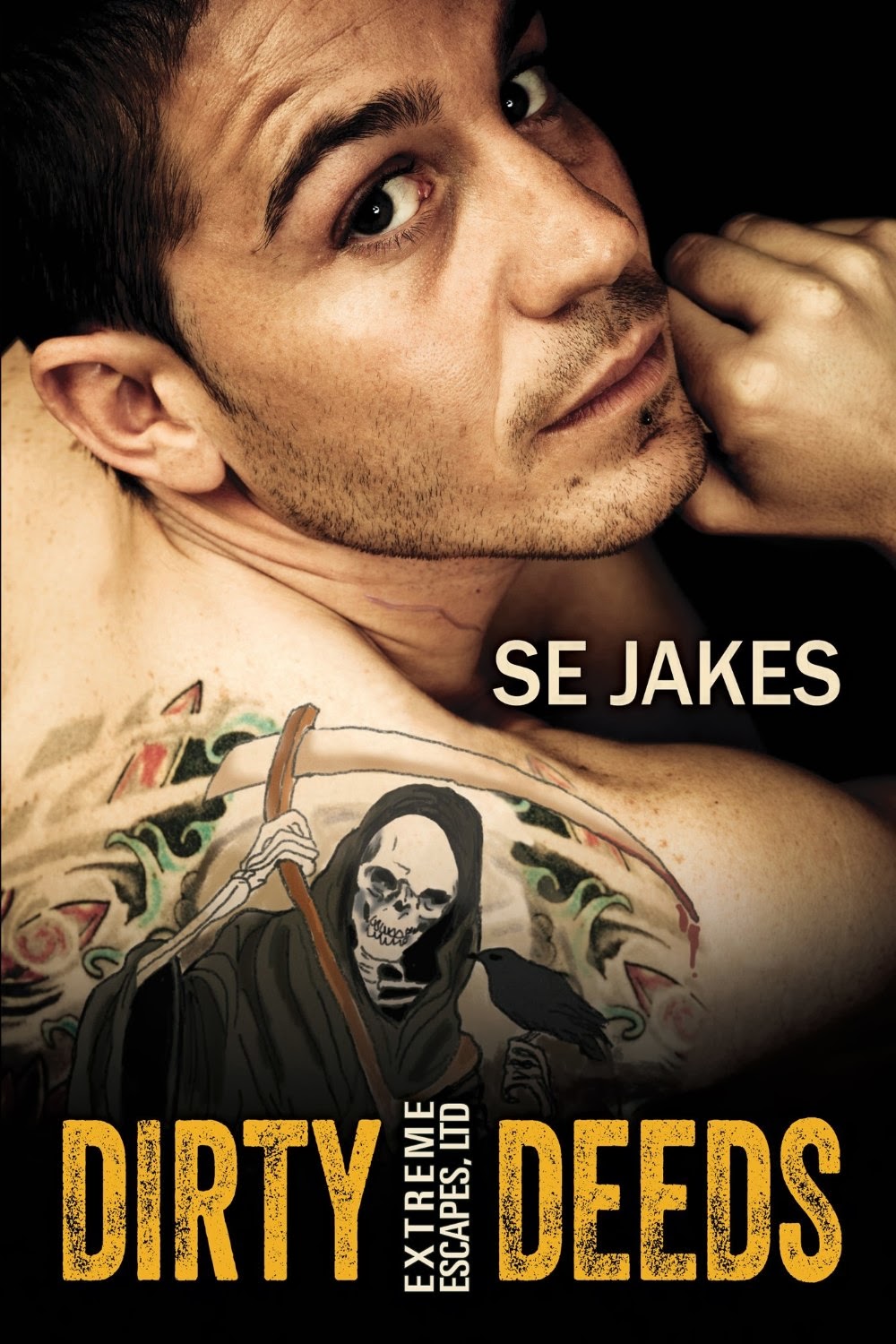 
Two seasoned operatives finally meet their match: each other.
Cillian works for the mysterious Special Branch 20: an organization that runs black ops commissioned by the British government. His specialty is deep undercover assignments with virtually no support. He’s been alone for so long that he no longer knows anything else.


Mal’s also used to being alone. Wanted in several states and even more countries, he’s not allowed in the vicinity of any of his former Navy SEAL teammates. And his current assignment is to track Cillian in order to discover the spook’s endgame. Except he’s no longer sure which one of them is getting played.


Cillian isn’t about to let the mission that’s consumed him for the past several years crumble because an outsider is poking around where he doesn’t belong. But Mal forces his way through Cillian’s defenses—and into his heart—exposing a devastating betrayal that could destroy them both.


OMG- HOW LONG DO WE HAVE TO WAIT?


Yep, that is exactly how I feel at this moment. I am sort of speechless!
You all know the movie A Knight’s Tale, remember that line ‘You have been weighed. You have been measured and you have been found wanting.’ that is so me right now!!!


What can I say about SE Jakes that everybody hasn’t already. She writes the most entertaining stories and the men just make you drool. So if you haven’t picked up a book by her yet, then you are so missing out. She manages to put a movie in a book..so great. You never know exactly what’s going to happen but there is always a little twist that somehow leaves you saying “OMG!” This is why she has become one of my favorite Authors. You are never disappointed and that rings above true for Dirty Deeds!


This is a short story that manages to punch you in the gut and leave you gasping for air! I loved it!! This is a story of spooks and spies in an intense thrilling mystery that will leave you speechless. It’s a web of espionage and a beginning of a steamy relationship. Cillian, is the man everyone is questioning. They need to know just whose side he is on and Mal is the one they send to find out. Little do they know, they are searching for the same terrorist/assasin, who had wronged them both in life.


Cillian and Mal are two very sizzling alphas who are use to being in control. When they collide it’s a battle to see who is boss right from the first meeting. These two men are accustomed to being alone especially when you do their line of work.  When they need to let off some steam they find it in a back room at a bar. It’s easier no attachments and no morning afters. So when Mal decides to take his assignment a little further and hooks up with Cillian at the bar, the chemistry just explodes! (yeah I was drooling!!) Thus begins the budding relationship of the two DOMS. (yep, that’s right I said Doms, crazy hot right! Oh, wait did I tell you that one of them is a “Switch”! For me there is nothing more sexy than a switch, it is the ultimate show of strength in the alpha male.) While Mal and Cillian are hell bent on trying not to fall for one another they can’t seem to stay away from each other when the case gets heavy and they need to wind down. The intimacy these two share is so sweet and the sexting is off the charts phenomenal!!  SEE WHAT I MEAN!!!! 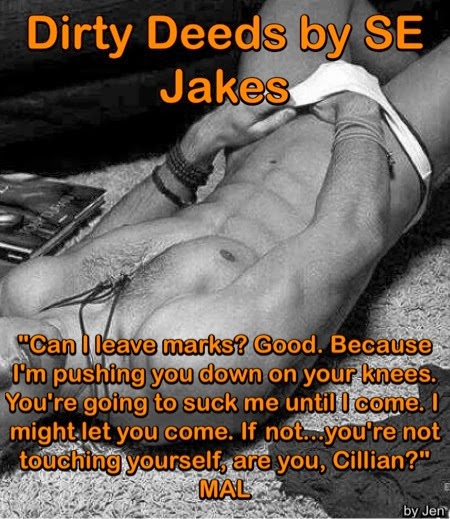 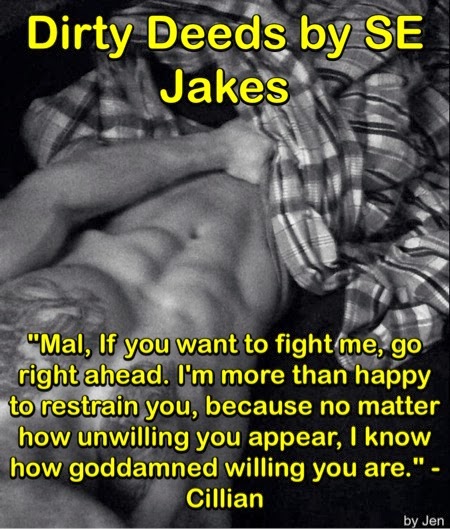 During the investigation into this case the web begins to unfold and dang if your not gonna get tangled all up in it! You will be so mad you just want to slap SE Jakes for this ending. It’s the ultimate cliffhanger. I can’t tell you more except to JUST READ IT!!! This is so worth it.

This was my first SE Jakes book and will not be my last.  WOW can she tell a story.  I couldn’t even write this review after I finished reading it I had to give myself time to process and wrap my mind around it.  This is a quick read but once I started I couldn’t put it down.  This book packs a punch I tell you.  From the moment I started reading tell the moment I put it down it was one of the best on the edge of my seat trying to figure out what was going to happen next books.  The sexting was just as hot as the sex in this book.  Plus you get not one but two hot Alpha males in one book how can you resist that.

Cillian is on an undercover mission to track down a traitor.  Mal’s assignment is to track Cillian down to find out who’s side he is on.  This is one of the best roller-coaster rides I have ever been on.  I was so giddy that Cillian and Mal were going to get together and then whoosh down that first hill of the roller-coaster straight in to a corkscrew throw in a few loops and then slam to a stop.

I was left speechless and gasping by the time I read the last page.  I was at a total loss I had so many things running through my head I was actually holding it in my hands trying to get my thoughts together.  All I could do was sit there and stare at my IPad thinking… How… What… Why… NOOOOOO.  I may have even yelled at my IPad not wanting this to be the end.  I am not one for cliffhangers but this was the best cliffhanger I have ever read.  How long do I have to wait for the rest of the story, because I need to know?


After reading this one I found out it was a spinoff of another series.  I had no difficulties jumping in to this book and reading it without reading the other series but now I want to go back and read the Hell or High Water Series.  I would say if one book makes you want to read another series then yes it is a great book.

I received this book from the author for an honest opinion.

So Jen is showing me a teaser and telling me about this hot, amazing M/M book she read.  Well the teaser picture pretty  much sold me...yes i love the M/M and will defo be reading more from this series.  Ok back to the review, SOOO  I figure Cool 85 pages I can knock that out in a day and move on to another book.  WELLLL, I didnt read for 2 days!!  Yes book hangover after 85 pages!!!  85 Freaking mind blowing, mega twisted, wild, hawt, sexy, orgasmic pages......OMG I can't stay focused....ok review Angie...tell them about the book already.....

So Mal and Cillian are spies for opposite teams basically.  I will admit i got really confused at the beginning with all the spies and teams so Jen had to give me a "cliff notes version" of the who and whats...yeah I can be a bit slow at times PLUS the first sex scene hit and I was a little light headed!!! Anyway, Cillian is out to get John not knowing that Mal is also after the same Man because he believes this old partner has tried to kill him.  Who wouldnt wanna find the guy who tried to kill you right?  Well Mal and Cillian start sexting each other after "meeting" in a club but Cillian doesnt know who Mal is but Mal knows Cillian.  The two have some of the freaking hottest sexting scenes I have ever freaking read...and people I have read me some hot stories with steamy sexting....Man, I can't even think about it with out blushing a bit.  I will say I was screen shooting it and showing my friends and saying "holy shit this is freaking hot!!"  Which is what got my friend/blogger Melinda to read it too...yes we like dirty sexy stories!!  LOL

So Mal and Cillian are both kind feeling each other but think they cant make it work or that the other isn't interested in the relationship.....then at the end of the book you are thinking "yeah happy HEA TIME" but NOOOOOOOOOOOOOOOOOOOOOOOOOOOOOOOOOOOOOOOOOOOOOOOOOOOOO  you get a total gut check.  I was sobbing and crying while at work. I was lost and broken and a bit mad that Jen didn't tell me EXACTLY how torn up I would be.  I mean It was a WTF moment I didn't see coming.  I am still like a mess.  i dont know who i feel sorrier for ...Mal or Cillian!!  OMG  am having an upset stomach right freaking now as i type this review.......seriously I cant give a lot of dets because this book is just so freaking awesome you NEED to experience it for yourself!!!

SE Jakes writes m/m romance. She believes in happy endings and fighting for what you want in both fiction and real life. She lives in New York with her family and most days, she can be found happily writing (in bed). No really...
She spends most of her time writing, but she loves to hear from readers, so you can contact her the following ways:
You can email her: authorsejakes@gmail.com
You can follow her Tumblr page: http://sejakes.tumblr.com/
You can post to her Facebook page: www.Facebook.com/SEJakes
You can Tweet her: www.Twitter.com/authorsejakes