Take What You Want - Ann Lister - Blog Tour Kick Off 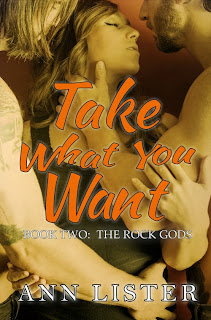 Mega rock star, Alex “Zander” Metcalf is burned out after nearly two years touring with his band, as well as emotionally drained after his sexual preferences were exposed by the media. He is ready for a long sabbatical – alone, and retreats to the east coast island of Martha's Vineyard; leasing an oceanside estate.

Alex seeks the quiet lifestyle of a recluse to write new material for his band, only to meet the handsome estate manager, Chase, and his gorgeous fiancée, Danni, living in the guest house on his property. Alex's hope of solitude is soon forgotten when he discovers Chase has a repressed bi-sexual side that is aching to surface and Alex is more than happy to help him explore it.

What neither Alex or Chase expects is the emotional power of their chemistry expanding to involve the three of them when Danni becomes entangled in their passion. Alex believes he has finally found his perfect menage relationship with Chase and Danni.

Sometimes two isn't enough and it takes three to complete the union of a fulfilled love. But, will their new relationship be strong enough to survive when real life wants to punish them for their unconventional love? And, can they be confident in the strength of their love to take the 'happily ever after' they can only give each other?
﻿
﻿

“I love you,” Alex whispered. “With everything I am. Heart and soul.”

Brenda's Review
I was more than honored to be able to be a beta reader for this book!!!  I was sooooo excited to be asked!  Like she would need to ASK?!?!?
I read and reviewed Fall For Me and totally fell in love with this series.  Rock God.....Dagger....Zander.....how could you NOT love this series?!?!?
If you read Fall For Me, you met Zander.  I really tried to NOT like him.  He tried to be with Ryan.  But it was in such a way that you weren't mad at him.  You wanted him to be with someone, but just not with Ryan.
This book starts where Fall for Me left off.  Zander was stressed.  He was "outed" about his sexuality.  He is bi-sexual.  He needed time away.  He decided to rent a house on the East Coast to write songs and get back in the groove.
Meanwhile, Chase and Danni are the "perfect" couple.  They are engaged to be married. Chase is the property manager and Danni is a yoga instructor.  Their life couldn't be more perfect....... OR CAN IT?!?!  Danni catches Chase watching gay porn on the computer.  She is shocked and concerned. They have a heart-to-heart talk and Chase finally admits that he is curious about his feelings he's having.
Zander moves in and meets Chase and Danni.  Zander (Alex) is immediately taken with Chase.  Danni is on her way out of town for two months.  Chase and Alex spend time together.  Chase is drawn to Alex, but is scared to act on his feelings.  Let me just say that many cold showers may be needed in this book.  WOW!!!
Chase confides in Danni and tells him what has happened with Alex.  Danni is hurt and confused. She thinks she's going to lose Chase.
Alex wants to have another perfect ménage relationship. He's scared that he cannot find what he had before.  But he wonders about Chase and Danni. He's fallen hard and fast for Chase.  When Danni comes back he spends time with her and is also falling in love with her, too.  But can she love them both?
There is a lot of drama, sexual tension, hot and steamy sex.  You will laugh, cry, and fan yourself!!  I even blushed....MANY TIMES..... some parts you will NOT want to read in public.  I had those moments, along with the ugly cry!  You know the one....your husband looks at you like something is terribly wrong but once he sees my face buried in my kindle, just shakes his head and hands me a tissue..... Yep, one of those moments!!
I honestly LOVED this book!  I cannot wait for the next book.  I sure hope Ann is writing it....(hint, WRITE FASTER ANN LISTER!).
OBVIOUSLY, this is a 5 star read for me!

"What they were offering was everything he'd always hoped he'd find with another man and a woman. It seemed surreal for that to be happening with the one couple he didn't want to live without – ever. He'd no longer be disposable. He'd belong to them equally, as they would belong to him. Three equal parts. And, he loved it."

Another Guest Review from the wonderful Marivett Vilifane!!!
Take What You Want is the second book in The Rock Gods series.  Fall for Me is book one.  Let’s start by saying I loved this book. Zander, the vocalist and guitarist for Ivory Tower is getting out of a bad breakup and decides to get away for a while and rents a secluded house in Martha’s Vineyard.  There he meets Chase, who’s the property manager.  Chase is engaged to Danni and one day Danni walks in on Chase doing something that totally surprised her (I won’t spoil it; you’ll just have to read it). Soon she discovers he has bisexual feelings. Once he admits he’s had feelings for the opposite sex, they don’t know what to do with this information but do decide to be honest with each other.
Danni goes away for two months, work related.  While she is away, Chase and Alex meet (Zander is his stage name).  The chemistry between the two is instant. Chase doesn’t act on his urges towards Alex because he just won’t be unfaithful to Danni.  After discussing the situation to her, she basically gives him permission to get it out of his system so they can move on.  Of course we all know that’s not gonna happen.  By the time Danni returns they are both in love, even though neither has said it out loud.  I was also kind of hoping she didn’t return (sheepish grin).
Once she is back, that’s when the problems begin.  Danni can tell they are in love without either of them saying anything and automatically she starts to feel left out. Chase doesn’t want to lose her because he truly loves her, but he also loves Chase, so he has a hard time figuring out what to do and how to make it work.  Alex also tires his hardest to connect with Danni and starts having feelings for her, but she just pushes him away.
The journey these three embark on is one filled with lots of emotion.  I felt everything they were going through. I love how the story flowed and how they finally connected.  I also loved how Ryan and Dagger from Fall for Me make an appearance which you will love.  I definitely recommend this book.  This was a 5 star book for me. Now I anxiously wait for Cooper’s story.

Ann Lister is a native New Englander currently living on the island of Martha's Vineyard with her husband. She has pulled details from her years living in the New England area and uses many local settings and landmarks in her novels.

After graduating art school and raising two daughters, she established her own video production company. Her nearly two decades working in video production included work within the music industry and won her a coveted Telly Award. It was this 'behind-the-scenes' exposure to the music world that inspired many of her novels.

Book Two in the Rock Gods series is titled, Take What You Want. This story is a m/m/f menage and released in early November 2013. Book Three, titled: Make You Mine, is expected to release in Spring of 2014.

When not writing, she enjoys reading, creating stained glass, and traveling.


a Rafflecopter giveaway
Posted by Unknown at 3:03 AM