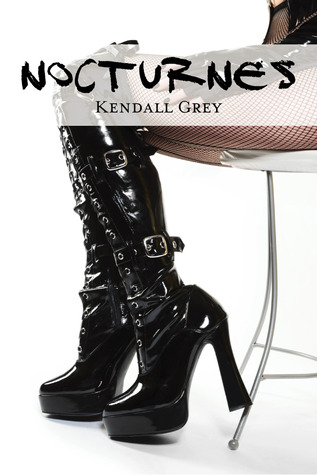 NOCTURNES contains 511 F-bombs, 81 well-endowed male chickens, 65 girl kitties, 58 Richard the Lessers, 10 C-U-Next-Tuesdays, and a plethora of other colorful words and phrases that would deafen your virginal mother’s ears and make her bust out her “Shame on you!” finger. If you’ve been tuned in since the beginning of the Hard Rock Harlots series, you know the drill. The sex is extreme, the language is graphic, and the story is over the top. Prudes and under 18s need not apply.

WARNING: NOCTURNES addresses serious topics such as alcoholism, prostitution, and cheating. If you’re looking for a barrel of laughs or sunshine and rainbows, this is NOT the book for you.

Rax Wrathbone is the dirty rock star you love to hate. The filthy fantasy slithering through your bed sheets. The serpent in your lady garden. The snake bite in your panties that keeps you sweating all night. He. Is. Sex.

And he’s no good. For anyone.

After a nasty breakup with his best friend and their band’s drummer, Rax is flying solo for the first time in years. Who needs the drama of commitment when the line for your humping booth spans three city blocks? No, groupies and liquor are far finer company than relationships, and they don’t leave bruises after they’ve had their way with you. At least not lasting ones.

Rax’s new adventures as an alcoholic, guitar-slashing one-man show are going along swimmingly until the only woman who’s ever brought him to his knees shimmies down a pole back into his life. Eve doesn’t abide excessive drinking, she has sex with strangers for a living, and she can’t remember Rax’s name to save her life.

She’s perfect in every way.

Now, if he could just get sober long enough to forget his past and convince Eve he’s worthy of her future…

Quote:
“So, you got shit-faced, spray-painted a barn with a lovely shade of Exorcist-green puke, fucked a donkey while you were there, and started a fist fight with a recovering, meth-addicted nun and her lovechild who were reenacting the nativity scene?”

I love this series that I downloaded it the day it released to read.

So I am a huge lover of Toombs and after all the crap Rax put him and Jinx through I really and truly expected to not like him even if this was his book.  Boy was I wrong.  I felt bad for Rax.  I didnt think he really loved Toombs but you get to see his heart break and hurt for everything he did to Toombs and Jinx.  it made my heart hurt for him.

Lola/Eve...I remember reading about her and him when they first met and I cracked up thinking poor stripper has to deal with his drunk self.  So when I found out that Eve was Lola I was cracking up.  I loved that he finally got a chance with his dream stripper.  Rax was well, Rax and a jerk to her.  I loved the "scene" in Hell that Rax had to video tape.  I totally googled that and my husband was like "what the hell are you looking at!!"  LOL!!!

So in this novel i found myself wanting to kick Rax in his sac because he was letting alcohol ruin his chance at happiness with Eve.  When she is attacked and he has this guilt that had he not been drinking he could have saved her...man, it killed me.  i loved how he was able to take the drinking by the horns and deal.  I also loved that my Toombs was there to help him...Dreamy Sigh........

This is a great addition o the series.  It is funny, crass, naughty, and full of everything that your mother told you not to read.  Which is totally why I love it.  I love the way the author writes.  I feel like I am listening to my girlfriends tell about their latest sexcapades with their boy toy of the night.

I love this series!  How could you not when you have guys like Shades and Toombs in it?  However this is about Rax, the one I liked the least out of the bunch.  I did not like his attitude, arrogance, always seemed to take what he wanted and never gave anything, and then after everything he put his best friend Toombs through not to mention Jinx to say he was my least favorite is an understatement.  However, by the end of the book he had totally changed my opinion about him.


Rax hits the bottle and a strip club to wash away his heartache which is where he finds his Lola, the stripper from Jacksonville that we get a glimpse of in Strings and he still pines for in Beats.  He is about to lose the chance at being with Lola when it seems the heavens open up for him and she asks him to do her a favor that could cause her to lose everything.  You want to know the favor you’re going to have to read the book cause I’m not going to tell.  All I can say is OMG.  It does crack me up that Eve cannot for the life of her get his name right no matter how many times Rax corrects her.

We see Rax struggle with alcoholism and how the band, his manager, and Lola/Eve help or enable him.  The scene of him outside Toombs and Jinx bedroom door, I wanted to jump in the book and give Rax a hug.  My heart broke for Rax and Eve in the alley behind Nocturnes when all hell breaks loose and both their lives are changed forever.  The surprise Toombs planed for Rax is the best I could just see the expression on Rax’s face as it all played out.

Like I said before I really did not like Rax and did not want to like him.  However, as time when on I felt drawn to him and even felt bad for him.  You can tell he really loved Toombs and even Jinx.  By the time I got to toward the end of the book I was rooting for both Rax and Eve to have a HEA.  They both had such a rough go of things in the beginning they deserved some happiness.  It was great to see Letty, Shades, Toombs, and Jinx again.  The way they all interact is awesome and no matter how big an ass Rax was they all stood behind him and supported him.  Rax is still not my favorite but I have to say he is starting to grow on me.

Kendall Grey is the self-appointed past, present, and future president of the Authors Behaving Badly Club. A whale warrior and indie freedom fighter, she spends summers in the corner (usually with a dunce cap on her head) and winters hunched at the peak of Mt. Trouble, fiery pens of fury (complete with invisible ink) flying across the pages. She has a big set of cajones, and she's not afraid to use them. In her spare time, Kendall speaks your mind so you don't have to.
Kendall lives off a dirt road near Atlanta, Georgia, but don't hold that against her.
justbreathenovels.com
kendallgrey.com