When the self-righteous, millionaire bachelorette, Dallas Knox walks into Hattiesburg’s largest night club she is looking for one thing – a one night stand with no strings attached. What she doesn’t expect is to find herself at the mercy of the Devil’s Renegades Motorcycle Club and their President-Luke Carmical.

Luke is dangerous, sexy, and dark. The life he lives is far different from the privileged life Dallas is accustomed to.

Can she accept the lifestyle of an MC?

Can she handle the domineering nature of Luke?

I recevied this review from the author for an honest review.

This book was a great read.  I literally sat down and devoured the whole book in less then 24 hours.  Thankfully the children were busy with video games and the husband was doing hubandly stuff so I was in my own world.

So in this book we meet Dallas who is in one world a BEEOTCH!!!  ok she is a self-serving BEEOTCH who only cares for herself.  I mean when Luke says "Dou you know how beautiful you are?" her answer is quite simply "Yes".  Sooo as you can see, she is not very likeable at first.  She is an alpha female and is defo in control of alllll parts of her life UNTIL......she is sad because she is beautiful and rich and powerful and COLD but her boyfriend is sleeping with another woman.  How could he do that to HER!!!  I mean she IS Dallas Knox!!  She decided a one night stabd will make her feel better until she meets LLC who saves her from a drunken fool.  From the first minute you meet Luke, you are defo in love with him. He is arrogant, cocky, prideful and basically an ass!!  Typical traits of an alpha male right ladies????

Well Luke and Dallas connect on a level that blows both of them away.  He is used to woman wanting him because of his status in the MC world.  She could care less about who he is and what position he holds.  He is drawn to her for that reason not to mention her beauty.  She is drawn to his alpha energy even though she fights it and hides from him several times before finally realizing he is meant for her.  He wont take her crap and puts her in her place.

Dallas does change her tune thanks to Luke.  He teachers her humility and loyalty and how to be KIND!!!  She befriends members of his club and proves to be a good fit to the club.  All seems to be going their way when a huge ass bombshell is dropped...OMG I didn't see it coming.  I was like "WOW!!!  Nicely played Ms. Jones, Nicely played!"

In a nut shell i am now shutting my lappy and beginning to read book 2 because i gotta know what the heck will happen with Luke and Dallas after this but "twist" is introduced. 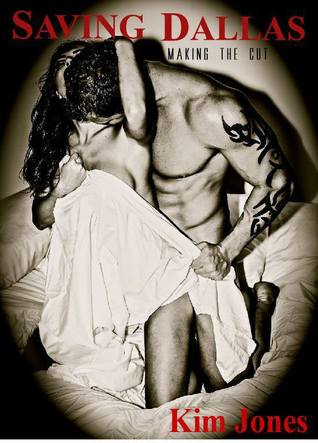 She went searching for a one night stand and ended up falling in love with Luke Carmical, President of the Devil’s Renegades Motorcycle Club. Now she must decide how to handle the aftermath of Frankie’s brutal assault and the knowledge that Luke has been lying to her- about everything. Secrets are revealed and more lies exposed as Dallas Knox, CEO of Knox Companies, becomes more involved in the MC. She wonders if this life is enough for her, if this family is really what she wants. When circumstances present her with an unusual twist of fate, Dallas knows without a doubt, thatthis is the family she has longed for. New problems occur, traumatic events take place and lives hang in the balance as Dallas has to decide what is really most important in life.

The journey is long.

The outcome is uncertain.

Can she Make the Cut?


I received this book from the authors.

HOLY Smokes!!! I liked book one and gave it a 4 star solid rating. This book was sooo much better and so intense throughout the entire book I had zero problem 5 star rating it. The sex was steamier, The drama was was more intense, the MC issues were way deeper then I knew, the bad guys were badder and O fell in love with LLC even more then I knew I could!!! *GASP* It is hard core love I feel for this MC president!!

So the twist that we get in book one left me with my mouth open wide and tongue hanging out.....WELLLL, lemme tell ya, that twist was twisted even more and left me saying "Oh Snap!!" I mean WOW I never saw the drama coming and people I read a LOT of books!! So I have to say My head was spinning with everything that happens. Dallas and Luke are defo left with alot of drama and issue to handle from her poisoning, her assault, her assistant, her new club role/position.....Plus Luke has slot going on with rivals trying to cause drama, Dallas' assault, the club expectations and finding out just how long he has loved and watched Dallas.

I really dont want to tell alot about this novel because it was so amazing. I was not able to put it down. I devoured this novel in 24 hours!! When I closed it I was happy but still left with alot of stuff that needs to be resolved in book 3!!! SQUEEE BOOK 3!!! i cannot wait!!!

Kim Jones is a writer with big dreams and a creative imagination. Her infatuation with the MC lifestyle inspired her to write a short story about a love affair between a prestigious young woman and a bad-ass biker. After falling in love with her characters, she turned the ten-thousand word short story into a novel. Juggling her full time job as a payroll clerk, her writing, and her role as ol’lady to her husband, Reggie, the novel was completed in March, 2013.

Kim resides in Collins, MS with her husband and two dogs. She plans to write two more books in the Saving Dallas series and release them in 2013.