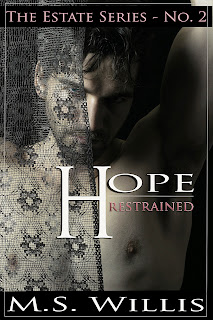 Raised within a rival crime network, Hope Delacroix wanted nothing to do with The Estate. A fierce warrior, Hope is given no choice but to kill Aaron Carmichael. Caught in her attempt, Hope is captured by Aaron’s top guard in an effort to discover who sent her.

Ever loyal and protective, Xander Black’s sole objective is to defend Aaron and Maddy. Willing to do whatever is necessary, Xander gives in to darkness in order to force information out of Hope.

As Xander enslaves Hope to break her down completely, he learns that in the two years since Joseph Carmichael’s death, dissension still exists within The Estate.

“I find it ironic that your name is Hope…especially considering that you have none.” ~ Xander Black

Posted by Twinsietalk at 8:00 AM