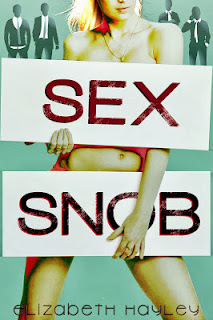 Sex Snob is a spin-off of Pieces of Perfect but can be read as a stand-alone novel.

Twenty-nine year old wild, carefree, and brutally sarcastic Amanda Bishop thought her three rules for dating would weed out unworthy suitors. And they did. Until she met Shane Reed, her smart-ass, sexy-as-sin CrossFit coach who pushes all her buttons. He’s the man she loves to hate. But when the hate begins to ebb away, and is replaced by feelings she can’t handle, Amanda hides behind her rules. Will the electric chemistry she feels with Shane allow her to get beyond a painful past, or will she push him away with her rules? Rules that make her the ultimate Sex Snob.


First Kiss with Shane
When Shane’s lips finally did greet mine, the feeling was even better than I’d imagined. They were softer and warmer than I’d ever felt, and when he parted my own lips with his tongue, I was lost in the delicious sensation, in the taste of beer and mint on his hot mouth. The stubble on his face scratched softly across my sensitive skin, only making the experience that much more stimulating. I expected him to pull away completely after a few moments, but instead, he backed off only slightly, hovering his mouth over mine, unsure of whether to go further. His fingers brushed my hair from my face, and a warmth radiated between my legs at his touch.
My breathing was already ragged, my pulse pounding in my ear since his first mention of making good on his bet. I slid my hands up his stomach and chest, relishing the feel of his muscular frame. My hands moved to the back of his head, pulling him closer, inviting him to be more aggressive. He continued his soft, teasing licks on the inside of my mouth, exploring me slowly, and I swept my tongue across his top lip. He responded as I’d hoped, gently nibbling at my bottom lip. God, is he a good kisser.
We continued like this, until a hesitant kiss between friends turned into something more passionate. With experienced precision, his tongue collided with mine. And when he pressed me up against the door, I could feel his erection on my lower stomach. I sensed him trying to control himself as he struggled not to roll his hips against mine.
But, God, I wanted him to. The kiss wasn’t enough. For either of us. We needed the friction that the other’s body would provide. My hands massaged up and down Shane’s back in rough, frantic movements, and he moaned into my mouth in response. He slid my shirt up just enough to tickle my skin with his fingertips. When I didn’t shy away, he worked his way up my stomach slowly, deliberately teasing on his journey to my hardened nipples.
With swift dexterity, he shifted my bra just enough to gain access to my breasts, which were heavy and full at the anticipation of his touch. I could feel the moisture between my thighs increase with every pull at my nipple, and as his tongue danced delicately down the front of my throat, I reached into the back of his jeans to grab his ass above his boxers. I needed him to rub against me, and he obeyed my silent request, his hips grinding in circles.


“Do you want me to stop?” he whispered against my ear.

I received this book from the authors for an honest review.
Holy hell was this book a riot. i am a preschool teacher so I do alot of reading while the kids take their 2 hours nap. OMG I was cracking up so ofter i would wake up the kids near me.....oooopppss!!! So be warned, this is funny. I really tell people that if they have read Tara Sivec's Seduction and Snacks...they will LOVE this book!!! The humor is just wrong on so many levels but i cracked up non the less......
Now i did read Pieces of Perfect before reading Sex Snob and I will say you don't have to read the first bk. Lily (the main character from book 1) is in it but her back story is pretty non existent in this book. Now with that stated, I gotta tell you about Amanda. She was hurt very badly but a jerk of a boyfriend. It left Amanda guarded and basically refusing to let anyone in. She is good for some hot sex but if you don't fit into her mold "of the right man" she will let you go. Well she hates her boss and thinks of fun ways to kill him (my favorite was to cut his brake lines and then casually mentions getting everyone coffee when she returns).
She does manage to work out a few nights a week at a gym but really cannot stand the person who runs her class. Her and Shane have a love hate relationship. The banter between them is sooooooo hilarious. Seriously when she tells him his idea of a good night out is LSD and Duct tape...fun for you but not so fun for the lady.....I almost peed my pants!!! Well another trainer is having a birthday and Shane asks if Amanda will go. She agrees and ends up having some fun with SHANE...what!! Can't be!!! He is a dud and poor....Well the two continue to have this amazingly hot chemistry. Every scene with them gets hotter and hotter. i was screaming....KISSSSSSSSS PLEASE!!!!!!!!!!!!!!!!!!! Well let me tell you that first kiss is *gulps ice tea* SIZZLING!!! But damn Amanda and her freaking RULES stops things from progressing. She freaks and tries to hide out....but it doesnt work very well.......She keeps denying her attraction to Shane because of her damn RULES!!! Well Shane defo pursues her but then kinda backs off and plays it cool until one night at the bar. When he admits his feelings she just spews venom at him and he is devistated. I will say I was SCREAMING at her by this point.
OMG I cannot forgot the sex in the book....holy hells bells. It was awesome. The chemistry between the characters is just thick. The sex is hot and hard but also was intimate and very caring. I love Shane and how he knew what Amanda wanted through the whole book.
Well after she realizes she needs to clear her head and she heads to visit her mom, i was cracking up......The ending scene with her and Shane was sweet and totally perfect for them. The epilogue is through Lily's eyes (it is preparing us fir the sequel to Pieces of Perfect.....) and i have to admit I loved this scene 110%. I think it really shows the true relationship between Shane and Amanda. I was extremely happy with the end sand look forward to more of them in Pieces part 2.......

Playlist:
“All of Me” by John Legend
“Beautiful” by Mariah Carey feat. Miguel
“Bump and Grind” by R. Kelly
“Classy Girls” by The Lumineers
“Crush” by Jennifer Paige
“Everything Has Changed” by Taylor Swift feat. Ed Sheeran
“Get Lucky” by Daft Punk feat. Pharrell
“Hot Mess” by Cobra Starship
“I Love It” by Icona Pop (feat. Charli XCX)
“I Never Told You” by Colbie Callait
“It Ain’t Love” by Green River Ordinance
“It Will Rain” by Bruno Mars
“Kiss Me Slowly” by Parachute.
“Last Friday Night” (T.G.I.F.) by Katy Perry
“Not Over You” by Gavin DeGraw
“The Other Side” by Jason Derulo
“Sexy and I Know It” by LMFAO
“Skin” by Rhianna
“S&M” by Rihanna
“Somebody’s Heartbreak” by Hunter Hayes
“Titanium” by Madilyn Bailey
“Why Don't We Get Drunk and Screw” by Jimmy Buffet
“Without You” by David Guetta (feat. Usher)
“You and Tequila” by Kenny Chesney (feat. Grace Potter)


About the Authors:
Elizabeth Hayley is actually "Elizabeth" and "Hayley," two friends who love  reading  romance  novels  to  obsessive  levels.  This  mutual love prompted  them  to put  their  English degrees to good use by penning their own.  The product is  Pieces of  Perfect, their debut novel. They  learned a ton about one  another  through the  process, like how they clearly share a brain and  have a persistent  need to text each other constantly (much to their husbands' chagrin). They are currently writing the  sequel to  Pieces of  Perfect,  which is expected to be released in the March 2014.

"Elizabeth" lives with her husband, one and a half year old daughter, and nutjob of a dog. “Hayley” lives with her husband and their own crazy dog. They are hoping to adopt a newborn soon.
Elizabeth Hayley's writing motto is best captured by the words of Patrick Dennis: "I always start with a clean piece of paper and a dirty mind."
Visit our fan page at Fans of Elizabeth Hayley and friend us on Facebook on our Elizabeth Hayley author page to interact with us directly.  We’d love to hear from you!  You can also find us on Goodreads.com, visit our blog at authorelizabethhayley.blogspot.com, and follow us on Twitter.
Author Facebook: https://www.facebook.com/elizabeth.hayley.1