Pride Before The Fall by JoAnna Grace Cover Reveal 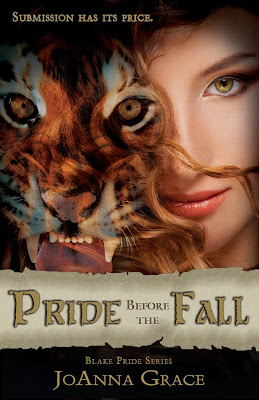 Tormented feline shape shifter Vivian Blake is every bit the alpha female—both on stage and on four legs. She commands the audience as confidently as she leads her fugitive family. On the run from a sadistic alpha that nearly died under her claws, Vivian does whatever it takes to keep her Pride safe and provide for them, even if that includes some less than legal activities.
When Vivian moves her family into wolf territory, her extracurricular habits raise more than just the eyebrows of the local wolf and bear mixed Pack. Kasey Blackburn, their powerful leader, is none too happy about a group of renegade cats moving in and turning tricks in his city. But one look at Vivian and his intentions change. She’s the sexy, powerful female he craves. Too bad she’s a feline with a death sentence hanging over her head. Not to mention the fact that several members of the Pack don’t care for their Alpha dating a stripper.
When Vivian comes into heat, the tigress within wars with her human side. The cat wants a mate but the woman wants escape. Can Vivian resist the promise of a fresh start with Kasey or will her pride cost her everything?

“He’s different than the others,” Vivian said to her family as they drove back to the ratty apartments they’d rented.

Kasey Blackburn had been much more than Vivian expected. The power most alphas possessed was faint in comparison to the wolf she’d just met. His potency was like another physical being in the room. On several occasions the energy of it washed over her body as a caress. He was the first alpha they’d been required to meet with face-to-face. The others had been fine with a phone call. He was also the only alpha to have such upscale offices in the heart of a city. It was obvious he was a businessman and his Pack was doing well due in no small part to that fact.

More than anything, she’d noticed how breathtaking he was. He was suave and sexy in a way that set him far above any other man she’d ever met. Even with gray-kissed black hair and crow’s feet forming around his eyes, he was still in his prime for a shifter. His rich blue-gray eyes had connected with hers as soon as she’d walked into his office and she’d seen the wolf looking back at her.

Blackburn’s reputation preceded him. Vivian hadn’t wanted to go into his jurisdiction until she absolutely had to. Unfortunately, it was now necessary. Kasey’s Pack wouldn’t offer them protection and she knew that. But any shifter who entered his territory had to be accounted for and maybe, just maybe, if Trace’s men followed them here, Vivian would be alerted.

“It’s because he’s a dog,” Conall joked from the driver’s seat. Their Pride had stuck to feline lands as much as possible.

“Naw,” Amilynn shook her head. “V’s right. This guy has his shit together. Even I didn’t ruffle his feathers.”

“And you were really trying today,” Melissa giggled.

“I hate it when you do that,” Ty mumbled at his sister.

Ami rolled her eyes. “Do what?”

“Whatever. He didn’t buy it so what does it matter?” Ami propped her army boots up on the dash of the dilapidated old suburban.

“He’s smart.” Vivian stared out the window and leaned her head back.

Melissa leaned closer into Ty’s arms and regarded her big sister. “What’s on your mind, V?”

Vivian smiled at her and shook her head. “Nothing, sweetheart. I’m just tired of all this relocating every other year.”

Melissa nodded her head. She knew all too well the burden her older sister carried as the alpha of their band of misfits. It wasn’t easy to have the responsibility of everyone’s safety and happiness on your shoulders.

Vivian thought about the man who had so generously allowed them to stay and run in his realm. Kasey was the kind of man she’d never dream of landing, but secretly wished she could. In their Pride in Nevada, she’d been one of the few overly dominant females. Sure, there were women who could keep up with the men, but few who could overpower them. She’d been pegged early on and her parents did their damnedest to “socialize and feminize” her. Piano and dance lessons, pearls and lace, manners and etiquette or she was punished. Vivian had been scared to be herself until she was nearly sixteen.

That was when her parents and teachers had realized she was not going to be tamed. Vivian had been pulled from the human school system and put in a special private school run on Pride lands. It was a program specifically for Pride soldiers and dominant females. The girls were trained in combat and taught to use their sexuality like a weapon. Vivian had excelled in hand-to-hand fighting and close proximity assassinations. By the time she was eighteen, Vivian could kill a man with her bare hands in fifteen different ways while blindfolded and wearing high heels. She was at the top of her class and Trace, the Pride alpha, took notice. It had been his biggest mistake. 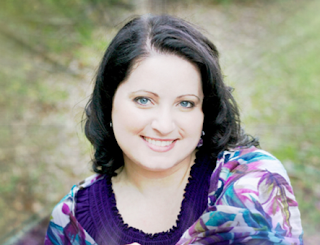 From the time I started holding a crayon I began creating magical worlds. My very first book was a series of pictures about a puppy princess. The story changed each time I told it, but there was always a happy ending! My first written story was about girls who changed into tigers. Hmmm.... I guess some concepts stick with you.

Now my stories have become a bit more complex! And I'm glad to share them with you.

My tales are spun in my home in East Texas where I live with my husband, three kids, a couple dogs and a few fish. When I'm not hiding behind my computer screen you can find me camping, boating, and shopping. I'm active in ministry and hope to pass on the unconditional love given to me to others. Occasionally I get to sing and no one runs screaming, so I guess it's not too bad!

Please shoot me an email, find me on Twitter or Facebook! I look forward to hearing from you.

Posted by Twinsietalk at 5:00 AM