GIVEAWAY, Guest Posting and Book Review of An Affair Across Times Square by Rachell Nichole 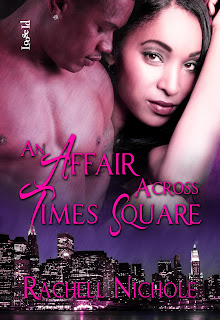 Book Blurb:
Layla Morgan is tired of getting into trouble, and getting hurt. And she fears her wild nature is going to strike yet again. But maybe this time, she’s finally met the guy that can stand close enough to touch her inner flames, and not get burned. The man across Times Square seems enthralled by her wildness instead of scared in the face of it. He can’t seem to look away as she shows him just how much fun she can have… with herself.

After one glance of silky skin and talented fingers, Tyler Lachlan doesn’t stand a chance of resisting the delicious distraction of the mystery woman from the Marietta Hotel. He’s sure there’s more to her than her sultry voice and mahogany thighs, but he doesn’t know if he’s willing to risk his career to find out.

What begins as a voyeuristic affair across Times Square develops into something more
Angie J's Review:
What would you do if you found out the person you are attracted to was your opponent in a trial...not just a small trial but a huge trial???  Well that is what happened to poor Layla and Tyler.  They both have seen each other and cant stop thinking about each other.  Talk about a big "oh crap" moment!!!
Layla and Tyler both feel that their side to the case is the winning or correct side.  I like that the trial doesn't overshadow the story too much but it is in there when it was important to the story.  I also loved the amazing, hawt, steamy sex between the characters.  If you haven't' read anything by Rachell Nichole I will say you are defo missing out.  She is a very skillful writer when she gets to the "good stuff" in he stories :)
I found this to be a quick read.  I loved how the characters in the story are now perfect by any stretch of the imagination.  They both had flaws but who doesn't right?  I mean I know I am not perfect at all!!!!!  Another thing I love about this author is her ability to throw a quick twist into the story and them BOOM everything changes.  This book also has a major twist and it leaves you saying "Niiiicely played Ms. Nichole, Nicely played!"
Authors Guest Posting:

Hi Twinsie Talk and hello to your readers,

An Engagement in Paris will star Mandy Lachlan, Tyler’s sister, and her French fiancé Julien Chevalier. Here’s the blurb:

All Mandy Lachlan wanted was her own identity. All she had to do was run away to Paris to find it. Instead, she finds love, a baby, and a marriage proposal.

Julien Chevalier needs to be free of Paris and his life there. As soon as he graduates, he’s moving to New York. But when he falls for a young American professor in love with the charm of his birth city, he’s determined to sway her back to the states with him.

But will her lukewarm reception to marriage plans make him run away to New York without her?

I’d love to add a giveaway to the post – leave a comment with your e-mail address to be entered to win!

Thanks so much for having me stop by and I hope you enjoyed reviewing the book. Readers, if you’d like to pick up a copy of An Affair Across Times Square it’s available at these places…

For more information on the Marietta Hotels series, please visit my website at www.RachellNichole.com
Thanks,