Cover Reveals of Tidal, Devoured and All Over You by Emily Snow

Welcome to the BIG cover reveal for Emily Snow!!! 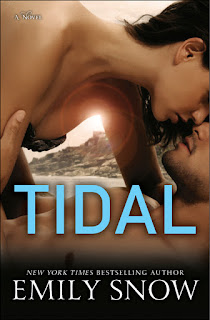 Now that Willow Avery is out of rehab, she's got one chance left to prove herself before she’s officially on every producer’s shit list. At least, that's what her parents and agent are claiming. She doesn't really give a damn if she never makes another movie or not—she just wants to get on with her life, get back to her friends, and find her next escape. But Willow is broke. And whether she likes it or not, acting is the only job she knows how to do.

When she accepts the lead in a beach drama, Willow finds herself in Hawaii. And in Hawaii, she finds Cooper, the gorgeous surfer hired to train her for her new role. With the bluest eyes she’s ever seen and the sexiest Australian accent she’s ever heard, Cooper’s different from the men she’s used to. He doesn’t want to use her. And he refuses to let her fail. But when an old friend re-enters Willow’s life—a friend whose toxicity she’s been drawn to time and time before and whose presence brings about the painful memories she's tried so hard to suppress—Willow will have to choose between the girl she was and the person she’s becoming. The lifestyle that helps her forget the pain and the guy she’s falling hard for.

Devoured and All Over You 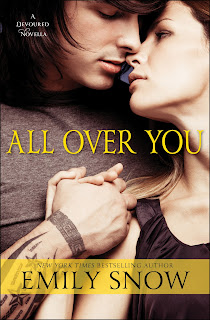 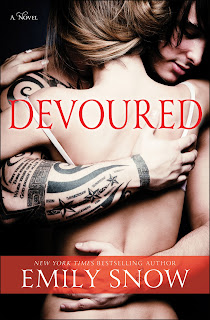 All Over You Book Blurb:

Before Sienna was devoured, before Lucas was consumed, they were all over each other . . .

Lucas Wolfe is used to getting what he wants—from everyone but one person, that is—so when he meets the wardrobe assistant hired to work his band’s newest video, he’s got to have her. From the moment Sienna first obediently whispers “Yes, Mr. Wolfe”, he knows she’s perfect for him.

And he’ll have her stripped down and bound to his bed.

Set two years before the events of DEVOURED, ALL OVER YOU is the story of Sienna and Lucas’s first encounter

Sienna Jensen had no plans to return home when she graduated college last spring—after all, her dreams lie in California. But when she discovers her grandmother’s Nashville home has been foreclosed, and the new owner has started the eviction process, Sienna has no other choice but go back to Music City. And she comes face to face with the flawed, gorgeous man she never thought she’d see again. The man who now holds the deed to her grandma’s estate.

When millionaire rock star Lucas Wolfe finds the outspoken redhead glaring at him from across a courtroom, he’s both infuriated and intrigued. He still can't get the night Sienna almost spent with him out of his mind, and the chemistry between them is as undeniable as it was two years ago. He craves Sienna more than ever. And just like everything Lucas hungers for, he’s determined to have her.

Now, Lucas will do whatever it takes to lure Sienna into his bed, even if that means making a deal with her: ten days with him, playing by his rules, and he’ll hand over the deed to her grandmother’s home. Though she agrees to the arrangement, Sienna is conflicted. Because of her duty to her family. Because of promises she’s made to herself and a past that still haunts her. And as Lucas’s game of seduction continues, and Sienna is introduced to his dark, erotic world and even darker background, she realizes that at any moment, she could be devoured.

Posted by Twinsietalk at 6:04 PM