Accidentally on Purpose and Worthy of Redemption by L.D. Davis 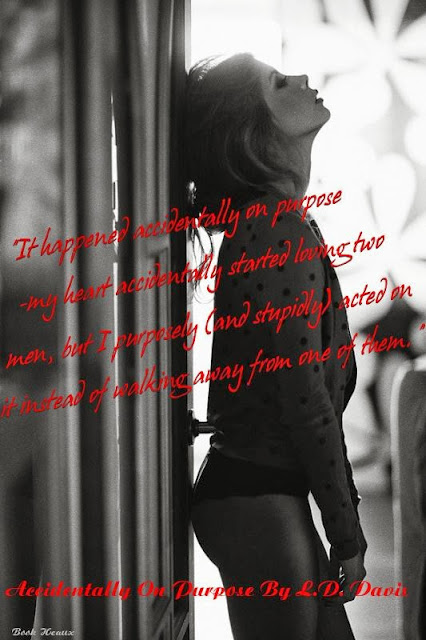 Emmy thinks her boss Kyle Sterling of Sterling Corporations is a jerk.So, she sleeps with him.Emmy tries to put the mistake behind her, but then finds herself snowed in with Kyle. As the snow builds, so does the heat in the house between the two. The problem is that Kyle has a steady girlfriend that he is unwilling to break up with. Emmy cuts Kyle off and starts dating Luke. Even as their relationship takes off, Emmy is finding Kyle hard to shake. He is blatant in his feelings and desires for Emmy, putting her in an awkward situation. She tries hard to resist Kyle, but deep down inside Emmy's motives are shady. When Emmy succumbs to her hidden feelings for Kyle without setting Luke free, devastating consequences ensue.In addition to her two men, Emmy daydreams about doing violent things to her loud mouthed, opinionated mother.With some humor and sarcasm, and of course, some tequila, Emmy's world will flip upside down as she deals with the results of "accidentally on purpose" falling for two men at once.

I was given this book by the author for an honest review.


AAAGGGHGHHHHH!!!!!  Ok I got that out first of all.  This book i read in 24 hours and if it wasnt for a job, sleep, children I would have read it without stopping.  From the first page I was hooked!!!  Em and Kyle have this toxic relationship right from the start.  Kyle is dating Jessyca but in love with Em.  He doesn't even really know her except from his creepy stalking he did before meeting her.  Anyway, Em decides that whats good for the goose...she starts to date Luke which just makes everything sooo much more complex.  I love Luke and the relaxing relationship that he and Em have.  However, I can see her draw to Kyle because their passion is combustible.  BUT, when you play with fire you will get burned.  This whole book is Em getting slowly burned by this toxic love she has with Kyle.  She is slowly losing Luke, her job, her friends and family (not that she cares about here awful mom)......then Kyle becomes soooo outta control and obsessed with her that the abuse begins.  By now Luke has said "peace out you liar and I never want to see you again"....Em is just spiraling out of control.  She wont leave Kyle.  She keeps holding out for him and a "them".  He makes promise after promise and Em is let down again and again.  New Years Eve is the ending of it allllll.....the reader doesn't find out until the end of the novel what all happens but you know it is BAD!!!!!
Em finds her way back to Luke due to a "situation" and they work alot out and then....Em and Kyle see each other again.  Kyle is wanting her to come back but thankfully Em stands her ground and tells him what she should have said years ago.  She geos back to Luke and is able to have a great life with him.  They have learned to communicate and work through all the stuff.


I left this review kinda generic because I don't want to ruin it.  I want you to take Em's journey.  Trust me, it is worth it completely!!! 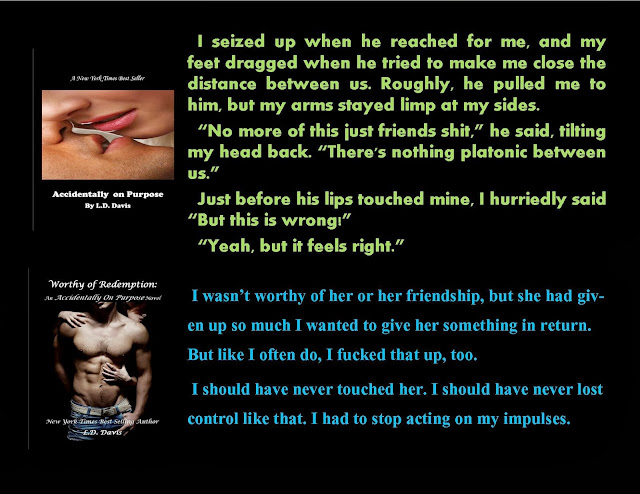 L.D. Davis is the New York Times Bestselling author of the novel Accidentally On Purpose and the novella Pieces of Rhys. L.D. began writing at a very young age with consistent support from teachers and friends. When she was only thirteen years old, she wrote her first romantic novella. A few years later at the age of nineteen, she completed another. Always writing, but never attempting to publish, L.D. left many projects unfinished over the years, but when she was thirty-four years old, she self-published her first full-length novel, Accidentally On Purpose. L.D. is currently working on two more books to go along with Accidentally On Purpose, two more projects to go along with Pieces Of Rhys, and several other novels.
L.D. has a serious addiction to reading, especially contemporary romance novels. She also loves the work of Dean Koontz, Janet Evanovich and classics like Lord Of The Rings and Jane Austen’s novels. She lives in a small East Coast town with her five children and husband.
Facebook: https://www.facebook.com/LDDavisWrites?
Goodreads: http://www.goodreads.com/author/show/5817154.L_D_Davis