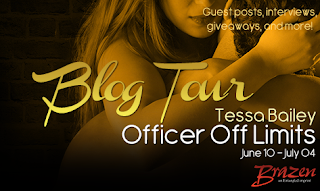 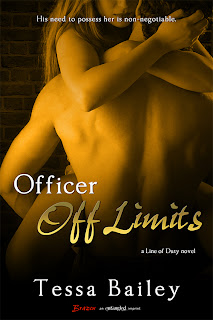 
His need to possess her is non-negotiable.


Story Brooks’ fiancé just called off their wedding two weeks before the happy day. As if that isn't bad enough, her semi-estranged father, an infamous NYPD hostage negotiator, has suffered a heart attack. Not wanting to examine her lack of emotion over the broken engagement, she hops on a plane to reconnect with her father before it’s too late.


Playboy hostage negotiator Daniel Chase has never, not once, been refused by a woman, so when a debate over hospital snack foods with a delectable kindergarten teacher ends in flat-out rejection, he makes it his mission to seduce her. His only obstacle? She’s the daughter of his mentor who implicitly forbade Daniel from pursuing her.


Despite her father’s warnings and Daniel’s troubled past, Daniel and Story can’t resist their intense attraction to one another. But when the reason for her fiancé’s abrupt wedding cancellation comes to light, can Story and Daniel's already forbidden relationship survive?


This book releases on June 10.


I have not read anything by Tessa Bailey before.  I will be reading more though!  This book was really good.  VERY HOT scene warning!! Probably one of the hottest car sex scenes I’ve ever read!!  I’m still fanning myself from that part!!


Anyway...Story Brooks starts out in the book having dinner with her fiancé, Foster.  He’s actually dumping her two weeks before the wedding – and before she can even order dessert!  What does she do?  She orders a bottle of the best champagne TO GO!!  She’s walking out of the restaurant to a cab, she realizes that she’s not even sad.  Just as she’s about home she receives a phone call that her estranged father suffered from a heart attack....in New York.  She grabs some clothes and hops a plane to New York City!!


While waiting to see her father she goes to grab a snack from the vending machine....little did she know she was about to meet the man that will change her life!


Daniel Chase....(he sounds sooo hot!  I really need to get a visual for him!)....grew up as a foster kid.  He’s had many things happen to him and he feels he’s not worthy of love or to be loved.  He’s a playboy.  He’s one of the top Hostage Negotiator working for his mentor Jack.  Jack is Story’s estranged father.  Daniel has women falling all over him.  He’s at the hospital visiting his mentor and friend when a nurse puts her phone number in his pocket.  Then he sees “her”  a vision in yellow at a vending machine.....

I love the banter between Daniel and Story.  They fit to well together!  Can they do this?  Is Story ready to move on?  Is this a rebound?  Can she have feelings this fast?  I’m not going to spoil it for you, but this story will drag you in.  Hell, I’m not even a sports fan and I now want to go to a baseball game just so I can see if I can find Daniel and maybe meet him in the parking lot!  (wink wink).


There are some really great and memorable quotes in this book.  Here are a few of my favorites:


At the memory of Daniel’s mouth on hers, his hands moving possessively over her skin.  Story felt her blood heat.  Pressing a cool hand to her cheek to relieve the spreading pinkness, she tried to think of something, anything, else:  Austin Powers.  Rotten bananas.  Beatlemania.  Scabies.   Nothing worked.


"Belong to me, Story.  Even if it’s just for a little while.” (this one is my favorite!)
"How do people live their lives feeling like this, day in and day out? Like your next breath depends on another person's happiness? She's torture and heaven all rolled up into one forbidden package."


Somehow she'd ended up in bed with the man mothers warn their daughters to stay away from, the kind of man fathers go after with a shotgun. Sobbing daughters trailing behind them in a wedding dress. She should have stayed away, because now she knew what all the fuss was about, she would not be satisfied with anything less. He'd blindsided her, ruined her, and addicted her in one single evening.


See, what did I tell you!?!?!  I didn’t even put the “hot” quotes in there, you’ll have to read it to find those yourselves!!
Hey, Tessa is also doing a Give Away!  Check out the Rafflecopter below!!  You could win a $50 Amazon Gift card!!  Who doesn’t love that?  Good Luck and Happy Reading!


· Would I re-read this book: Yes!!  I think I read parts so fast that I missed some good stuff!
· Would I read future books by this author: Absolutely Yes
· Was there a cliffhanger:  no- but I want to hear more about them!
· Do I love the characters: YES
· Do I want more of their story:  yes!
· Is this part of a series:  Yes.  This is Book 3 of the Line of Duty Series.  They are also stand alone books.  I have not read any of the others.....YET


Tessa lives in Brooklyn, New York with her husband and young daughter. When she isn't writing or reading romance, Tessa enjoys a good argument and thirty-minute recipes.