Off the Record by Sawyer Bennett 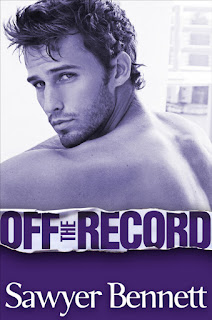 Ever Montgomery suffered the ultimate betrayal by the one man who she should have been able to count on for anything. It has left her hurt, jaded and incapable of forming relationships, but it also means that she can spot a liar a mile away. These traits are earning her a reputation as a reporter with a keen nose for a good story and a complete understanding of the extreme power of the written word.

Lincoln Caldwell, is the hot goalie for the New York Rangers. At twenty-four and a rising star, he works hard and he plays even harder. He’s gorgeous and carefree—the ultimate charmer. Ladies fall at his feet and the single life has never been lived the way Linc Caldwell does it.

When Ever publishes an article about Linc containing information that she received off the record, she finds herself on the receiving end of the athelete’s fury. Rather than basking in the glory of exposing Linc as a shameless user of women, she finds herself at his mercy when he demands and receives retribution. Required by her editor to trail Linc for six weeks, Ever is forced to look at the real Linc Caldwell.

And she just might find that she has misjudged him.

I received this book from the author as an ARC copy.  I have to say I have read all 3 of the books in the series and I have grown so in love with them.  The author is wonderfully personal and open.  She is a lot of fun to read for.

This is book 3 in this series. I honestly loved each book and think the writing is solid and amazing.  I cannot say which book is my favorite because each book is so different.  The books cover different topics that the main characters have to get over to be together.  It is really a tough pick.  I will say Linc and Ever's journey to HEA was a great read.

Linc is a hottie who is known as a player and it was even hinted a bit in book 2 about his playboy ways but this book you find out it may not alllll be so true.  Ever is a broken woman.  Her heart has been broken and betrayed by 2 very important men in her life and she will not let anyone in.  She is a journalist of a prominent newspaper.  She gets her friend Emily to hook her up with an interview with Emily's boyfriends brother.   She chats Linc up at a party and is kinda interested but she is leaving for 6 weeks so no reason to accept his dinner invitation right???  When she leaves the party he is throwing, she believes some "incorrect" information and believes he is a man-whore.  She goes home and the heart broken woman writes a not very nice story about him.  Linc doesn't take it so well and threatens legal action.  He manages to get her assigned to him for 6 weeks to get to know him and write a better, more accurate article about him......needless to say 6 weeks a lot happens between the 2 of them in 6 weeks.

The chemistry between the two of them is hot but if you have read the other 2 books you know the chemistry is always hot.....Linc gets Ever to open up and that scares the crap out of her.  She WILL NOT be hurt again but he is slowly melting her icy heart.  I think my favorite scenes are when Ever get jealous of Linc's hockey fans....er.....groupies trying to get his attention.  Althought when Linc defends Ever to a few of the fans...er groupies and calls her his Girlfriend I just remember saying "Awwwwww his girlfriend...sniff".

Well I love this series and will do just about anything to read any of this authors books because I abso love them.  I love how they are quick reads but full of emotion and heart.  I feel very connected to the characters she writes about.  I love that we get to go back ans see Nix and Emily's relationship from book 2 grow.  I will admit to missing Danny and Ryan from book 1 and would love to see how the new family is doing :)  So I guess I am saying I need more from this series *hint hint* to get more information on my favorite hockey couples .......

Facebook
Don't forget to "Like" her author page please and thanks!
Sawyer Bennett is the pen name for a snarky southern woman and reformed trial lawyer who decided to finally start putting on paper all of the stories that were floating in her head. She is married to a mobster (well, a market researcher) and they have two big, furry dogs who hog the bed. Sawyer would like to report she doesn't have many weaknesses but can be bribed with a nominal amount of milk chocolate.