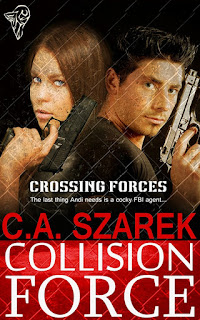 Badboy, married to his job FBI agent Cole Lucas always gets his man. So when the unthinkable happens and one gets away, Cole grits his teeth and hunts human trafficker Carlo Maldonado all the way to Antioch, Texas, where he collides with Detective Andi MacLaren.

Cole doesn’t do small towns and he doesn’t get involved with women he works with, but Andi tempts him in ways he doesn’t want to acknowledge.


Two murders, her partner shot and leading the investigation on her own, the last thing Andi needs is a cocky FBI agent that sees her as no more than a tagalong.


Widow and single mother Andi is used to being on her own. When Cole gets stuck without a place to stay, crashing on her couch puts them in dangerous territory.

Attraction and passion bring Andi to a place she left behind when her husband died.
Her three-year-old son quickly wiggles his way into Cole’s heart, and he starts contemplating things—family, love—that he’d never planned for himself.

Can being forced to work together make them stronger or will their differences jeopardize their case and their hearts?