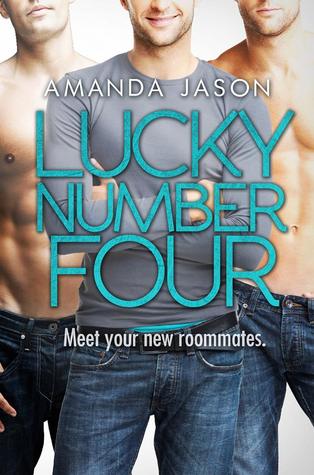 Pandora Ann Phillips' life is just normal-crazy
Her mom's a psychic, her dad's mom is a snob, her mom's parental units are "too down to earth" and her best friends are newlyweds. Okay, so her best friends being newlyweds isn't really abnormal, but living with them in a cramped two-bedroom apartment definitely is. Sex, sex, sex is totally on their minds. Actually it's not only on their minds, but it's on the kitchen table, couch, on top of the washer...well, you get the picture.
Being a celibate (not by choice, mind you) full-time college student, and an almost full-time barista, Pandora can't afford to lose anymore sleep. So, she seeks out a new place to lay her head. Enter three "drool worthy" male models that are looking for a fourth roommate and they want her...and won't take no for an answer.
Hilarity ensues as Pandora's life turns completely upside down, and she begins to wonder if it will ever be the same again

I received this book from my friend Susan because she said I had to read it.  She knows being a blogger I dont generally buy a book cuz I have so many free ones so she sent it to me and said READ IT!!  SOOOOO I did.  OMG I am so glad I did.  I just finished up an intense read and needed somthing fun.  This book really hit the spot until the sexual chemistry and tension kicked in and then I was a mess...AGAIN!!!

SO this book was sooo original.  I loved the fact she has abilities to "read" people and her mom is a psychic.  I thought that was a new kinda plot and I enjoy new and different.  So Dora has had it with listening to her best friends/hubby and wife duo having sex.  She sees an ad for a roomie needed.  She calls and thinks the girl sounds fun.  She goes to the apartment and is stunned stupid to see 3 hot FAMOUS MODELS there that would be her roomies not the sweet girl giving the tour.  So what does she do?  RUNS FOR THE HILLS!!!!  Well the guys decide she is the one.  She doesnt give a crap if they are rich and famous and beautiful....she doesnt want them.  noone ever doesnt want them...I mean hello remember they are famous and rich male models!!!  Well they basically move her in to their apartment and her bestie/hubby and wife duo too.  The whole book is Dora's POV but all of a sudden we hear one of the guys POV and he is smitten with her...but we have no clue who!!!  Player Drew, English hottie and gentleman Collin or brooding Liam????

I have to tell you I was like "OMG its Drew...no to obvious...It's Collin....no he is ignorning her...It's Liam...damn it he being to quiet and shy......"I kept switiching my mind through the entire book.  Then on halloween they host a Costume Party.  All the guys come dressed as mask wearing musketeers....well....GASP...he kisses her...BUT WHO IT IS DAMN IT!!!!  OMG I was just as perpplexed as Dore...I mean WHO has the lips that made her almost have an O!!??  WHOOOOOOOOOOOO...........

Ok I dont want to spill alot of the dating and house silly stuff because I will end up telling which guy it is....and you need to read this yourself.....like for real!!!  Ok so I will start getting a bit generic....Lets just say Dora and the Guy end up hooking up and having a great time.....But then she freaks cuz he is a beautiful model and she is just PLAIN!!  Well she did start to make me mental when she breaks it off but I did love the twist that brings them back together.

I am telling you the epilogue was awesome......I  cant tell any part of it because it is just so special that you need to read to appreciate it but I am in heaven and I really want to read more because I wannaknow about this couple, and the other 2 guys.  I need them to have an HEA too!!!

I purchased this book after seeing some promos for it on FB stating it was funny and then my fellow blogger said a friend bought it for her to read stating it was great.  So how could I pass it up?
I could not put this down once I picked it up.  It started with Dora listening to her best friends and roommates getting it on.  This leads her to the decision she needs to move out.  She answers a roommate wanted add.  Thinking she would be sharing a room with a nice girl that she talks to on the phone only to realize when she gets to the loft it is with 3 SEXY famous models did I mention they are all males.  She does the only thing she can think of RUNS as fast as her feet will take her.  Well the guys are having no part of it they track her down and not only convince her to move in with them but convince her roommates to movie into an apartment in the building also.  All because Liam has a thing for Lucky Number Four and they have to have a forth roommate. This is where the fun starts.  Dora starts having feeling for a couple of the guys but refuses to act on it.  We also get little snippets that show one of the three guys have a thing for her but have no idea which one it is.

Dora is a sympath and can pick up on people’s feelings and Dora’s mother is a psychic.  Dora’s mother keeps telling her she needs to help Drew and Liam.  Not knowing how to help them she is focused on Colin and after the boys show up dressed alike and masked one of them kiss her and she just knows it is Colin.  I go through this book thinking Oh I know its Liam it’s got to be Liam and then wait no it’s Drew I think it’s Drew, oh but wait now I know it has to be Colin.  Oh the suspense of who it is is just killing me.  I cannot tell you how many times I went back and forth on who the mystery guy was.

Then when I did find out whom it was I was all giddy and happy.  They went away but by him being a model the pressure of the spot light spooks Dora and she does what she does best and RUNS as fast as her feet will go.  Does Dora get her HEA does the Hot model get his girl? Guess you will have to one click it and find out.

I loved this book.  I loved Dora’s crazy family, the Psychic mom, the Grandma that will say anything that pops in her mind without even thinking twice or once for that matter, the Grandmother that is prim and proper and Dora’s three best friends.  I loved them all and how they all interacted with each other and Dora.

Amanda Jason is the pen name for Carol Kunz's New Adult romance novels. She is the C part of the mother and son author duo, C.A. Kunz. The pen name Amanda Jason actually has a special meaning to Carol because it is a tribute to the set of twins she lost many years ago. Carol began her dream of writing when her son, Adam, asked her to write a young adult fantasy novel back in 2011. She couldn't have been happier to embark on this wonderful journey into the literary world with her son because it was #1 on her bucket list.
Carol currently lives in sunny Florida with her hubby and her two four-legged fur babies. She takes comfort in the fact that her amazing daughter and son live close by. When she isn't writing, you can find her walking her yellow Lab or reading a good book. Lucky Number four is the debut novel of Amanda Jason, and it's been a long time coming
Posted by Twinsietalk at 12:00 AM