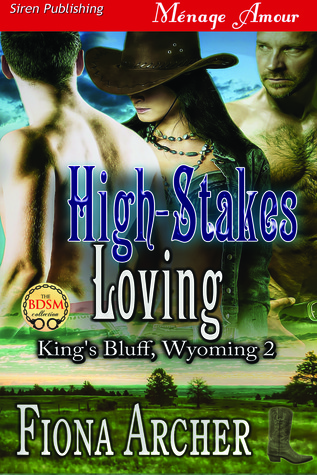 Blurb:
Former SEALs Quinn and Mike have discovered in King's Bluff, Wyoming, a town that embraces ménage and BDSM lifestyles. Even better, they found a sweet woman they could love--if they could only gain the shy librarian's trust. Overhearing that she adores capture fantasy books, the two Doms know exactly how to get her attention.
Trapped between two experienced Masters, Reagan surrenders. They're commanding, determined, yet gentle, and everything she ever wanted. Even as she learns what it is to be cherished, a secret from the past emerges, threatening her reputation. She hires her lovers to investigate, expecting them to be on her side. But the damning evidence they uncover rocks their relationship.
As pressure for the truth mounts, danger stalks Reagan. Someone out there believes secrets are best left buried.
Long-held misconceptions and fears stand in their way, risking their futures and allowing the threat closer. The three must fight as one for their love to survive

“You like a bite of pain.” Mike pushed two fingers between the lips of her pussy. They slid over her skin with shocking ease. “And here’s the proof.” He raised his fingers and admired their glossy wetness before putting them straight in his mouth.
He closed his eyes and groaned. “I want more.” Within seconds, he ended up between her thighs.
Hell, she’d been praying for this moment. She bent her knees and widened her legs for him.
“Such an eager sub.” His warm breath tickled the sensitive folds of her pussy.
Reagan lifted her head off the pillow. The thirst to see him there and not just hear his voice was too much.
Mike’s gaze darkened as he stared back at her. “My pussy, Reagan. Mine and Quinn’s.”
Her core clenched with need. She dropped her head. Quinn’s wide chest and face filled her vision as the spicy scent of his aftershave, smoky undertones with a musky lift, filled her senses.
Mike spread apart her pussy lips. The sound of his sharp inhale singed her ears.
No man had ever made such a fuss down there. In the nearly bare cupboard of her sexual history, only two men had ever gone down on her. Neither of them had brought her to climax.
Mike ran the tip of his tongue down one side of her labia, then up the other, and finished by circling her entrance. He repeated the pattern, over and again, each time edging in closer to her center and the primed bundle of nerves.
God, her clit felt huge. She licked her lips but couldn’t stay quiet against the desperate need growing with every second. A low whine rose from her throat.
“Easy, sweetheart.” Quinn flicked his nail over the top of one nipple, then the other. He leaned over and drew the left bud in his mouth, sucking it until it hardened to a point.
Just as she opened her mouth, Quinn grazed the top with his teeth.
Then Mike flicked his tongue over the tip of her clit.
“Sweet Jesus.” She clenched her hands into fists.
Mike alternated a flurry of short, rapid licks by plunging his tongue into her vagina. Each sweep of her rim set off a wave of tiny vibrations from her opening, out over her pussy and the curve of her inner thighs. The waves continued to build until a threatening storm drew her body so tight her muscles shook from the strain.
Quinn intensified his pitiless ravaging of her breasts. Both nipples throbbed from the constant pinching and sharp suckling. He rolled her nipple in his mouth, squeezing it with a precise amount of pressure, enough to make her whimper from the burn only his kind of pain could bring.
In all her life she’d never allowed herself beyond the barriers of good-girl behavior. Now she was craving pain? Even in a diluted form? In minutes, these men had carried her past decadent and straight into “burn in hell” fervor. God help her, she’d grasped it with greedy hands.
Mike plunged a finger inside her, swirling it against her vaginal walls. Then he added another, stretching her, rubbing that spot for a treasured second. Four, five times he stroked. His tongue flicked her clit, starting a constant rhythm in time with the stroke of his fingers.
She closed her eyes. How much longer? She couldn’t keep going. “Please, Quinn, Mike, I c-can’t. Please.” She sobbed.
Get closer. She curved her spine. More pressure. Lifting her bottom, she tried to rock her body. Just a couple more seconds...
Mike’s fingers trailed down an inch inside her thigh.
What was he—
Burning pain throbbed from a pinch. “Owww!”
“No topping from the bottom, sub,” Mike said.
She threw her head back against the pillow. “I’m sorry. Please. I’m so sorry. This is the first time I’ve—” She gulped down a sob. “I mean, I’ve never c-come before, not this way.”
A warm breath fanned the spot on her abused skin. A soft kiss landed right on top. Then a line of kisses started all the way up from the curve of her thigh to the side of her labia, ending up on the hood of her clit. The sheer gentleness of the gesture lay in stark contrast to the power of Mike’s caress on her body.
“That kind of honesty deserves a reward. Quinn?”
Her tormentor lifted his mouth, releasing her nipple. His eyes crinkled at the edges. “Agreed. Come for us, sugar.”

I received this smoking, sexy as hell book from the author for an honest review.

HOLY HELL!!!  Ok so IF you have read Chloe's Double Draw by this author you know what you are gonna be in for....sexy, mega alpha men who are going to win their sub at allll costs.  I fell in love with Chloe's book and have been harping Fiona for the next book.  She sent it to me and I sat, slowly savioring every single page, chapter, and scene......It. Did. Not. Dissappoint!!  In Chloe's book we meet Librarian Reagan and the two sexy as hell ex Seals Mike and Quinn.  I must admit I am totally draw to both men, like Reagan, for their seperate personalities.  I mean Mike is not Mr. Sensitive or hearts and flowers guy but he loves to cook.  Quinn is more the hearts and flowers guy but he is all facts not emotion when investigating.  They are sooooo perfectly matched for her.  OMG I just loved them....I mean I may even love them more the Noah and Flynn...GASP don't repeat that statement!!  LOL  The guys were drawn to Reagan in the 1st book so I will thrilled to learn of their relationship in this book.

Reagan is attracted to the men but keeps running and hiding from them.  She wants them but is more affraid of appearances.  When the guys finally "claim" her for a first date I loved the scene!!  It was great.  Then to see Noah and Flynn with their sub Chloe happy at the picnic was amazing!!!  The 3 have amazing chemistry and alot of hot menage scenes as well as seperate times together. They all fit together perfectly as a "family".

The drama of the story I presumed would be all about reagan fighting the DB Karl for a city council seat to save the town.  I was thrilled when it made a total turn in to a murder that the guys were investigating.  This investigation caused some issues for them  and there is a major "cool off period" between the 3.  However, when the guys are through with the drama, they fight to get their girl back....and what a great scene it was!!!

If you like menage, suspense-thrillers, love stories, alpha man, fun girl power, and all that stuff...this is a book for you!!  I am sooo dying to find out who is next?  Caleb?  or the Mackenzie Brothers?/  I have to admit, I dont care who it is as lomg as we get to read it soooooon!!!


I live in the sunny environs of Sydney, Australia, and share a house with my dog, Letty. Oh, and the flock of cockatoos that take over the back yard each afternoon, demanding their feed of Arnott's Milk Arrowroot Biscuits. Things get a little noisy around 3.00pm in our household.

My love of romance started back when I was twelve and my mum's stash of Mills and Boon novels proved too much of a temptation. At fifteen, I decided the life of a romance writer was for me. Some...ah...years later, I've clawed together enough gumption to make my dream a reality.

When not sitting in front of the computer, I can be found in the garden or enthralled watching a murder mystery DVD. I limit myself to reading other authors' work between writing my own stories. Books are my 'shiny' distractions