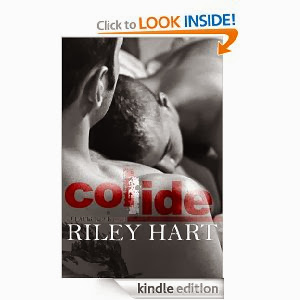 Synopsis
At ten years old, Noah Jameson and Cooper Bradshaw collided mid-air when they dove for the same football. For three years, they were inseparable…until one day when Noah and his parents disappeared in the middle of the night.

Noah and Cooper never knew what happened to each other. Now, seventeen years later, after finding his boyfriend in bed with another man, Noah returns to Blackcreek looking for a fresh start. And damned if he doesn’t find his old friend grew up to be sexy as sin. Coop can’t believe Noah—the only person he trusted with the guilt over his parents’ death—is back. And gay… Or that Cooper himself suddenly wants another man in his bed for the first time.

There’s no denying the attraction and emotion between them, but can they overcome the ghosts of their pasts to have a future together?

I must say I loved this book. It is a story of self-discovery and coping with the outcomes of real life. We all know what it's like to have a BFF growing up. You know that one person who just makes life easy and your problems kinda go away when you’re with them. That is this story to a tee. Cooper and Noah have been friends since grade school always depending on each other. Then one day Noah just leaves and 17 years later, literally collides with Cooper once again. Once they connect, Noah tells him he is gay. Cooper just can't believe it. The shocker is he can't seem to keep his eyes off Noah and he's straight. WOW, the chemistry between these two was so off the chart. Noah, who refuses to ever hide, is secretly falling for Cooper but is afraid to take that jump. Cooper, the sexy fireman, just doesn't understand why his body and heart are telling him that Noah could be " it" .   Once these two finally take the plunge, the sex is steamy, sensual and romantic. I was fanning myself a lot. I loved Cooper discovering all of the aspects of having a relationship with a man. I felt the pain of loss that Cooper had experienced his entire life after losing his parents. I wanted to just hold him. The strength of Noah I admired as he became the constant once again for Cooper. There were times while reading this book that made me just want to shake some sense into Cooper for not trusting his heart and worrying about everyone else. I certainly wanted to punch Uncle Vernon a lot. I loved all the different emotions I felt while reading this journey of everlasting friendship and love. I would recommend you read this book if you want a sizzling hot book with two great guys.
Buy Links

Author's Info
Riley Hart is the girl who wears her heart on her sleeve. She's a hopeless romantic. A lover of sexy stories, passionate men, and writing about all the trouble they can get into together. If she's not writing, you'll probably find her reading.

Riley lives in California with her awesome family, who she is thankful for everyday.

http://www.rileyhartwrites.blogspot.com
﻿
Posted by Unknown at 1:00 AM