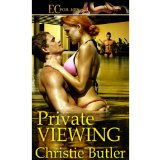 Nick Damon is desperately in love with his sexy Claire, a former lingerie model. Whenever they’re out, men gawk at her and flirt. Most men would be pissed, but not Nick. He loves it, is so aroused by it that it leads to mind-blowing sex. It’s become a game for them.
Living the dream life, Claire had no complaints. Used to being ogled and fantasized about, she loves how her husband always wants to show her off. Then Grayson Hill moved in next door. He’s hot and sexy and makes no secret of his desire for her.
It hasn’t escaped Nick’s notice that their new neighbor is hot for his wife. Suddenly he’s ready to change the rules of the game. Now to see how Claire reacts when she finds out Nick wants another man to do more than just look.
An EC for Men ménage erotica story from Ellora’s Cave

Brenda’s Review
I received an ARC from the publisher for an honest review.

I read this book in under an hour.  YEP, it’s a quick read!  It’s very hot.  It’s just not a deep enough story for me.  I guess I am used to reading long and deep stories or series.  I’m not saying that is a bad story.  Not at all.  It was just over before I knew it and I felt that I still wanted to know more about the characters and what happened next.

Claire and Nick are very happily married.  Claire is an ex-lingerie model.  Nick a successful lawyer.  They love each other and show it a lot.  Nick loves it when he sees other guys looking/ogling his wife.  He loves it so much that when he notices his new neighbor – Grayson – ogling and even touching his wife that he gets idea of inviting him into their bedroom.

So basically the bulk (no pun intended) of this story happens during their night of hot steamy sticky passion.  It really is hot!  I just wished there was more!!

So if you are looking for a hot and quick read.....THIS IS YOUR BOOK!!

PS:  I know that authors are with publishers don’t really get a say in the price of their books.  I do feel that the author may get some negative comments because of it.  Please don’t rate the book because of the price.

· Would I re-read this book: No
· Would I read future books by this author: Yes
· Was there a cliffhanger:  No
· Do I love the characters: Yes
· Do I want more of their story:  Yes!
· Is this part of a series:  No

Christie Butler was born in the Midwest and has lived there ever since. In her spare time, Christie enjoys reading, travel, good food, and quality time with her lovable dog. She is a lifelong avid reader with a fertile imagination and, despite a full time career, she has recently chosen to write down some stories of her own.

Barnes & Noble:  Not available
Ellora’s Cave:  https://www.allromanceebooks.com/product-privateviewing-1252128-355.html
Amazon:
Posted by Unknown at 12:00 AM