Here's a treat from the fabulous Sawyer Bennett!!! Enjoy everyone!!!

Here’s today’s teaser and a bonus teaser scene. It’s from when Renner first sees Cillian and takes place  in the Prologue, five years before the story starts.  Xoxoxo

And then, a lone spotlight comes down on the lead guitarist just as the lyrics begin. He stops playing the guitar, swinging it to his hip and grabs a hold of the microphone in front of him. The music slows and softens, and I'm entranced as he starts singing.
He's tall and lean...almost gangly. And he's young...maybe just a few years older than me. He's Black Irish...what us Americans like to term those Irishmen that have dark hair, olive skin and dark eyes. His hair is long and shaggy, falling forward over his eyes as he sings and just brushing the tips of his shoulders. I take in the fact that he is dressed in faded black jeans that are tucked into black combat boots, a white t-shirt and a faded red-plaid shirt. As he holds the microphone with both hands, I notice he has several leather bracelets around each wrist and just a peak of tattoos shining through.
He is, quite simply, the hottest guy I've ever seen in my entire life, and I'm sure it has everything to do with the fact he's on a stage singing in the most sexy, caramel rich voice I've ever heard in my life.
She goes down, down, down...
I push her down, down, down...
Hot breath, moist lips...
She goes down, down, down...
My face flames red as I listen to the lyrics.
Cady leans over to me but she has to practically yell so I can hear her. "Cillian's good, isn't he?"
I just nod at her. That also answers my question...Cillian is the band's lead singer.
Taking another sip of my beer, I get lost in his music, the atmosphere, and the wildness of Cillian.
His lips graze the microphone as he sings and I can't help but wonder what they would feel like sliding over my lips in the same way. At one point, he looks down to our table and a quick smile comes to his face when he sees Cady. She waves at him and his smile turns bigger. His gaze moves off of Cady in a casual way, checking out the people around. His eyes skim over me and pass me by, and I feel disappointment. But just as that brief glimpse moves over me, his eyes snap right back to mine. I can see his eyebrows rise under his shaggy bangs, and then he gets an almost sensual smile on his face. I feel the redness still staining my face get brighter and start creeping down my neck under his bold perusal.
But I hold his look.
I force myself not to let my shyness prevail. I pretend that he is singing only for me.
And he doesn't look away from me for the rest of the song. 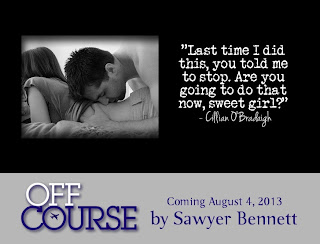 Posted by Twinsietalk at 2:50 PM