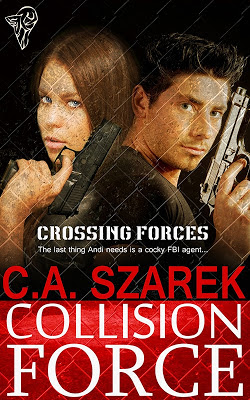 Book one in the Crossing Forces series

Bad boy, married to his job FBI agent Cole Lucas always gets his man. So when the unthinkable happens and one gets away, Cole grits his teeth and hunts human trafficker Carlo Maldonado all the way to Antioch, Texas, where he collides with Detective Andi MacLaren.

Cole doesn’t do small towns and doesn’t get involved with women he works with, but Andi tempts him in ways he doesn’t want to acknowledge.

Two murders, her partner shot and leading the investigation on her own, the last thing Andi needs is a cocky FBI agent who sees her as no more than a tagalong.

Widow and single mother Andi is used to being on her own. When Cole gets stuck without a place to stay, crashing on her couch puts them in dangerous territory.

Attraction and passion bring Andi to a place she’d left behind when her husband died. Her three-year-old son quickly wiggles his way into Cole’s heart, and he starts contemplating things—family, love—that he’d never planned for himself.

Can being forced to work together make them stronger or will their differences jeopardise their case and their hearts?

I chose to read this book because so far I have loved everything that C.A. Szarek has written. Love fantasy romance? Read Sword's Call. ;)

Collision Force is Romantic Suspense and wow does it ever live up to the genre. It's fast paced and keeps you on your toes from beginning to end. It's definitely a page turner and I didn't want it to end. You fall deeply in love with the characters and at time's want to bash their heads in. When does that not happen in a romance book? Lol!

Andi is headstrong and I just love her. Definitely one of my favorite heroine's. She keeps Cole on his toes and isn't afraid to speak her mind. She's a role model for young girls and I can't wait to read about her and Cole.

Without giving too much away, some things happen to bring Andi and Cole together and I, as demented this may sound, really love the bad guys. They're written so well, they creep me out and that's the point right?

I think Andi and Cole will be my favorite couple throughout this series just because they were the first but I can't wait to read the next book. Great job C.A. Szarek and keep up the wonderful work!

Cole cursed. He stared into the rear-view mirror in the busy parking lot, but saw nothing. He’d been so close this time.
The damn local police were breathing down his neck, and that was the last thing he wanted…or needed.
Cooperation, my ass. They needed to get the hell out of his case. He’d been too involved for too long, and he wasn’t about to let some Podunk police chief tell him what to do.
Not to mention that dumbass detective getting himself shot. Cole didn’t need the locals piecing it all together. He had to wrap up a few things before letting them in on his case. Full disclosure wasn’t on his list at all.
That bastard Maldonado had got away from him. Even two months later, that still chapped. But he’d tracked him here and been in town a few weeks with no clues. Until the shooting. Two goons dead and a police detective shot twice. And Maldonado had slipped back into the shadows. Cole’s gut told him the coward was still in town… He hadn’t—or couldn’t—move on. But where the hell was he?
Cole’s cell phone rang, yanking him from his thoughts.
“Lucas,” he said.
“Where the hell are you?” Olivia Barnes, his supervisor, barked at him. “Chief Martin called screaming at me. He said you told him to kiss your ass? What the hell, Cole? I told you to cooperate with them.”
Cole snorted. Chief Martin had misquoted him, but not by much.
“I don’t need them, Olivia.”
“Oh, don’t Olivia me. This was an order from higher up. Get that through your thick skull, dammit. Get to that station and make nice. Now.”
Cole sighed. His boss didn’t respond. Though her tone had brooked no argument, he’d been tempted to tell her to kiss his ass. It wasn’t like his record wasn’t tainted, and it wouldn’t have been the first time he’d told her off. But he held his tongue. He was damn good at his job, and Olivia knew it. Cole would play along, for now.
“All right,” he answered. Olivia was silent on the other end of the phone. Too silent.
“All right?”
“You’ve ordered me, correct?” Cole said dryly. He could almost hear her eyes narrow.
“Just like that?”
“Just like that. C’mon, Liv, I can be a good boy.”
She harrumphed. “Okay. Go kiss Chief Martin’s ass.”
“Can’t promise that, but I will go to the station.”
“Good. I can’t afford any more damage control, Agent Lucas.”
Uh oh, Agent Lucas? “Sounds like a warning.”
“It is.” Olivia lowered her voice. “I don’t want to have to yank you off the case, Cole.”
Like that would happen. “I’ll call you later.”
She started to say something, but he ended the call imagining her outraged expression—one he was quite familiar with. He smirked. Yes, he would play along…for now.
The drive to the station was short, but didn’t alleviate his irritation with the whole damn situation. He slammed the car door and winced, berating himself. He loved this car. Cole patted the hood in apology, admiring the brand new, deep metallic blue Dodge Challenger. It looked mean as hell. Like it was made for him. He’d even contemplated keeping it when this was all over.
He groaned when he took in the smallish Antioch, Texas police station, but headed inside. The asshole desk sergeant practically growled when he introduced himself, as did Chief Martin over the intercom. He ran into the female, literally, right after Sergeant Asshole-of-the-year had finally acknowledged his existence and buzzed him into the back. And although his head smarted, seeing a beautiful woman was the highlight of his morning.
“Whoa, sorry,” she said, smiling. Her chestnut hair was pulled back into a ponytail and she had the bluest eyes he’d ever seen. She was tall and slender, and he liked what he saw. She was wearing a white button-down dress shirt and snug khaki pants, and the outfit was somehow incredibly sexy. 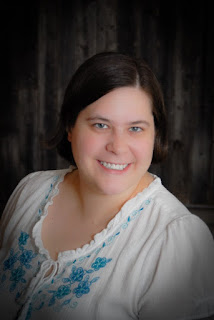