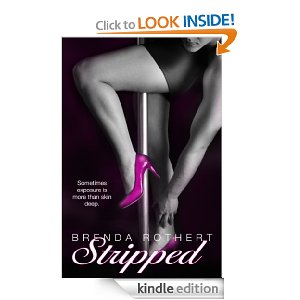 Book Review by Brenda Wright
Book Blurb:
Abby Gillis is used to being called a promiscuous, uneducated whore. It’s all in a day’s work when you’re a stripper. Since her job allows her to support her siblings, 24-year-old Abby takes it all off in stride. She’s never had trouble keeping men at arm’s length – until she meets ER physician Chris Reneau, who is sexy, sweet and interested in more than what’s beneath her clothes. As their relationship unfolds, Abby becomes increasingly aware of the desire building in her for the first time, and of her yearning to be wanted by the one man who truly sees all of her.

Commitment-averse Chris finds himself in uncharted territory. He wants Abby, that’s clear, but he can’t accept not having all of her. As the distance between them erodes, he tries to convince Abby to give up stripping for a chance at something real.
As the two of them get closer, Abby realizes that truly baring it all has nothing to do with her body. Chris makes her feel more exposed than she ever has, and she has to grapple with what’s left when her notions about herself and those around her are stripped away, leaving only the naked truth.


My Review:
I was given an ARC of this book for an honest review.
Honestly, it took me a few chapters to get into this book.  But when I got hooked, I couldn’t put it down.  Abby is a big sister to brother and two sisters.  Her so-called drug-using self-medicating mother hates her.  Dear old Mom takes every opportunity to talk down to Abby and steal money from her.  Meanwhile, Abby is working full-time plus works a few nights a week as a stripper.  She’s the care-giver to her siblings and does not want to let them down.
One night while working at the club.  She and her co-stripper are giving a lap dance to the groom-to-be at a bachelor party.  His friend seems very interested in Abby.  Abby offers him a lap dance but he refuses.  She can’t help to be offended yet attracted to him at the same time.  She doesn’t feel “worthy” of him.  She could never land a guy like that.
A few days later her mom needs to be rushed to the hospital.  They are in the ER and in walks Bachelor Party guy who refuses the lap dance – and he’s the doctor!  Dr. Chris Reneau!
Not to give away all the good parts....it turns out they are very much attracted to each other.  They each have their own “issues” to work through.  Abby has very little self-esteem.  Chris is nervous about relationships..... can it work out?  Hmmmm you’ll have to read it to find out!
There were many times I yelled at my Kindle!  ABBY WHAT ARE YOU THINKING!!  DON’T THROW AWAY A PERFECTLY GOOD MAN!  And CHRIS, GO AFTER THAT GIRL!    Oh, it was frustrating!  But I’m so glad that I read it!

Overall Rating:  4 stars
Hero Hotness:  4 stars
Heroine Hotness:  4
Lovableness of couple: 4 stars
Tearjerker: 3 stars
Story Depth:  3 stars
Story Plot:  4 stars
Published May 2013
· Would I read future books by this author:  Yes
· Was there a cliffhanger:  No
· Do I love the characters: Yes
· Do I want more of their story:  Yes
· Is this part of a series:  No
About the Author

Brenda Rothert started her writing career as a print journalist. She now writes Romances, some Contemporary and others with a twist of dystopian society and adventure. Rothert lives in Central Illinois with her husband and three boys.
Good Reads link:  http://www.goodreads.com/author/show/7010859.Brenda_Rothert