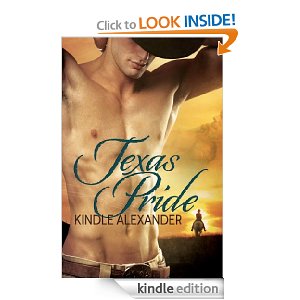 Book Review by Brenda Wright (hey if you read to the end...I have a surprise for you!!!)
Book Blurb:
When mega movie star and two time Academy Award winner, Austin Grainger voluntarily gave up his dazzling film career, his adoring fan base thought he’d lost his mind. For Austin, the seclusion of fifteen hundred acres in the middle of Texas sounds like paradise. No more cameras, paparazzi, or overzealous media to hound him every day and night. Little did the sexiest man alive know when one door closes, another usually opens. And Austin’s opened by way of a sexy, hot ranch owner right next door.
Kitt Kelly wasn’t your average rancher. He’s young, well-educated and has hidden his sexuality for most of his life. When his long time wet dream materializes as his a new neighbor it threatens everything he holds dear. No way the ranching community would ever accept him if he came out. With every part of his life riding on the edge, can Kitt risk it all for a chance at love or will responsibility to his family heritage cost him his one chance at happiness?
My Review:
I read this book because two good friends of mine recommended it.  And since they have never steered me wrong, I read it……and once again, I was NOT disappointed!!
This book is, by far, on the top of my list when it comes to a M/M story!  I loved Austin from the beginning.  Kitt, I could feel his pain and suffering from hiding from his truth.  Both Austin and Kitt grew up in the same small town.  Austin got out right away after high school and made it big!  He’s the top actor in Hollywood!  But he’s hiding…..and he can’t take it anymore.  He quits the “business” and goes into hiding.  He moves back home and buys land, next door to Kitt Kelly.  Kitt is struggling to keep the family farm afloat.  After the death of his father, he’s fighting to get the ranch modernized and back to making money.  He has to do it for his step-mom and little sisters.  He cannot disappoint them.  He’s also struggling with keeping his sexual preferences a secret, too.  He sneaks away to Dallas once a month to visit is sleep buddy, Sean.  He’s been with Sean for several years.  But now Sean wants more…….
THEN everything changes with the new “neighbor” moves in.  Kitt cannot believe what he’s seeing….the high school hottie turned movie star, the object of many many dreams, is standing in front of him – his new neighbor!
Austin is also stunned when he sees the hot cowboy standing….shirtless…..and what’s that?  Is that the signature “gay man’s” underwear sticking just above his well-fitting Wrangler jeans?  Could it be?  Could he be so lucky to move out in the middle of nowhere and live next door to the hottest man he’s ever seen AND could he be gay, too?
Austin immediately tries to put a plan together to get this hot cowboy in his bed!  I don’t want to give away the story, but  I will say this was an amazing love story with the struggles of “coming out”.  Kitt doesn’t think he can ever come out.  It would ruin the family ranch and everything for his famly.  Austin is finally ready to come out, but will wait for Kitt.
The plan gets changed unexpectedly….. Will their love survive?  Will the small-town ranching community accept a gay rancher?
I can’t say enough about this book!  The author writes the story so well that you really believe that you are in the story with Austin and Kitt.  At times, I felt like I was interrupting the hot sex scenes because I thought I was “there”.  LOL
But this is more than a M/M sex story….It’s about finding themselves.  It’s about being truthful with themselves.  It’s about love…..
I would DEFINITELY like this to be a series…….hint hint to Kindle Alexander!!!
Thanks again to Denise and Marivett for the suggestion!  You’ve never done me wrong!!! :)
Overall Rating:  5 stars
Hero Hotness:  5 stars to each of them!!
Heroine Hotness:  NA
Lovableness of couple:  5 stars
Tearjerker: 3 star
Story Depth:  4 stars
Story Plot:  4 stars
306 Pages
Published March 2013
About the Author
Best Selling Author Kindle Alexander is an innovative writer, and a genre-crosser who writes classic fantasy, romance, suspense, and erotica in both the male/male and male/female genres. It’s always a surprise to see what’s coming next! Happily married, with five children, and four dogs living in the suburbs of Dallas, where the only thing bigger than an over active imagination
Check out Kindle Alexander at www.kindlealexander.com

Posted by Twinsietalk at 2:00 AM