**Attention this future brother is also already claimed by our guest poster Amee P.  Please see the pictures below of JR Ward signing her "MINE" Shirt and the picture of Amee with her autographed JM book. Thank you and enjoy her review of her male of worth. Also please understand her review MAYBE slightly skewed. ** 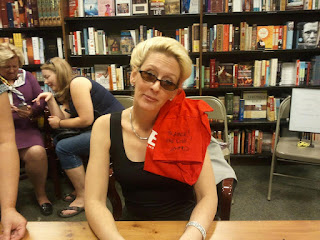 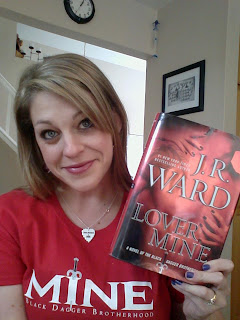 In the darkest corners of the night in Caldwell, New York, a conflict like no other rages. Long divided as a terrifying battleground for the vampires and their enemies, the city is home to a band of brothers born to defend their race: the warrior vampires of the Black Dagger Brotherhood.

John Matthew has come a long way since he was found living among humans, his vampire nature unknown to himself and to those around him. After he was taken in by the Brotherhood, no one could guess what his true history was- or his true identity. Indeed, the fallen Brother Darius has returned, but with a different face and a very different destiny. As a vicious personal vendetta takes John into the heart of the war, he will need to call up on both who he is now and who he once was in order to face off against evil incarnate.

Xhex, a symphath assassin, has long steeled herself against the attraction between her and John Matthew. Having already lost one lover to madness, she will not allow the male of worth to fall prey to the darkness of her twisted life. When fate intervenes, however, the two discover that love, like destiny, is inevitable between soul mates.

I am going to start by saying, actually screaming, I LOVE THIS BOOK, THIS IS MY FAVORITE BOOK OF ALL TIME!!!!!!! I can only give 5 stars here but if I could I would give it a 100 out of 5...LOL. Most of the BDB books, I am re-reading for only the first some the 2nd time, but this book I have now read 5 times!!! This is JOHN MATTHEWS story and not only is this my favorite book he is my favorite male *sigh*! He is my favorite Male character, heck favorite character period male or female, of every book I have ever read. WHY? Well there are so many reasons and I think I shall share some of them! The fact that he is a big bad a$$ sexy vampire fighter only scratches the surface with him, there are so many parts of HIM that make me *sigh* every time I hear the two initials J and M together. Mainly he is not only strong on the outside but strong on the inside! He can not speak, he is mute, but that doesn't keep him from doing anything. He has faced horrible hardships in his life and yet his philosophy is to keep moving forward and to not dwell on the past. This is the same way I personally feel about life, so it is really hard for me not to totally fall for him!!!! He is a protector, he would never allow something bad to happen to even a complete innocent stranger. He knows what is right and what is wrong and he follows the path of being right as best he can but he is not afraid to man up to any mistakes he makes. Those are just a FEW reasons why JM is my favorite EVERYTHING!

From the start of this series JM has a major 'voice' in the world of the Black Dagger Brotherhood. You get to see a lot of the world from his POV. He enters almost as a total stranger.... He is like you as the reader. He doesn't know about the BDB or the world and you, the reader, get to find out along with him as well as feel what he is feeling. When he enters the story in Lover Eternal as a small pretrans you will be immediately captivated by his character and you will be itching for him to get his own story. It takes a while though for him to mature and get to the point where he is ready to find love, Lover Mine is the 8th book in the BDB series but it is defiantly WELL worth the wait, plus it isn't like the previous 7 books aren't amazing to read first! LOL. By Lover Enshrined, the 6th book, you already know who JM's female is going to be but being that she is 1/2 sympath and a total hard a$$ it is NOT an easy road for the two of them. At the end of Lover Avenged, book 7, Xhex disappears. Xhex is known in the series thus far as Rehvenge's best friend, the head of security at the clubs Rehvenge owns and overall just a TUFF FEMALE! Only JM's best friends, Qhuinn and Blay have an idea of the connection the two of them have before Lover Mine. When Xhex goes missing JM can not help but make it his mission to find and/or avenge her.

Not only are John Matthew and Xhex front and center in this book but the greatest villain of all time is at the head front. Lash, son of the Omega, is.........lets just say I HATE HIM....I DO NOT LOVE TO HATE HIM, I HATE TO HATE HIM! I hate him with every inch of my being! He is seriously horrible, a miserable life source set on this earth to hurt John! And hurt John he does, over and over and over again....but who will have the final say??? Well you will have to read to find out.

This book also has a lot of other things going on....you get to meet a mysterious "ghost" who we have still yet to know much about in the series. As well as Wrath, the blind king, has a new friend and she is a twist that is interesting to say the least. Also, the story between his friends Qhuinn and Blay progresses.

Lover Mine is packed full of everything you could want in a good story, action, mystery, sex, love, romance, wonder, humor....the list goes on and on. J.R. Ward is such a good author and this book proves why she is on the NY Times best selling list!!! You will not be disappointed when you read this book you will, as with all other BDB books, only be wanting MORE!

Lastly I would just like to reiterate JOHN MATTHEW is amazing, he is an unbelievable male in ALL departments! Just the mention of his name makes me speechless and involuntarily causes me to *SIGH*!
**HAPPY READING**