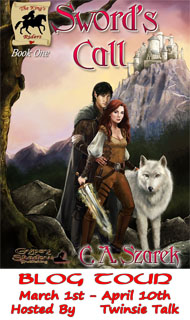 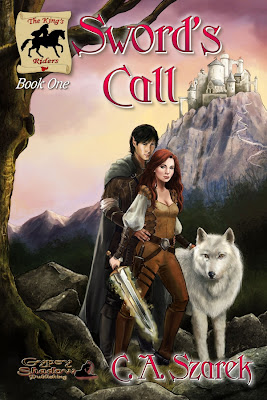 For generations, the Ryhans, ruling family of the Province of Greenwald have been keepers of a sword rumored to possess enough magic to defeat kings. Lord Varthan, a former archduke and betrayer of the king, covets the sword and invades Greenwald.

Lady Ceralda Ryhan, daughter of the murdered duke, gains the sword and flees, trusting only her white wolf, Trikser—magically bonded to her. Cera needs nothing more to aid in her fight.

Jorrin Aldern, half elfin and half human, left his home in the mountains of Aramour to find his human father who disappeared twenty turns before, but finds Cera with Varthan and his shades on her tail instead. His dual heritage and empathic magic will tempt Cera in ways she never thought she’d desire. But can he convince her trust and love can pave the path to redemption or will the epic battle end in tragedy and evil conquer them all?

Jo-Anna's Review:
First off, congratulations to C.A. Szarek for the release of her first book, Sword's Call in the King's Riders series!! I'm so happy and honored that I got to read this book.

I got asked to do an honest review of this book so here it goes. I absolutely loved it!! I don't usually read fantasy romance books but I'm glad I
read this one. This story has elves, magic, wolves, and a whole bunch of other fabulous things that makes this a world to get lost in.

I just love Cera and Jorrin! Cera is a strong female character and she's someone you could look up to for advice or have fighting by your
side. She's definitely one that could take care of her own. With Trik by her, no one can get in the way.

Being half human and half elfen, doesn't make life easy for Jorrin. But he meets Cera and together, a new love grows. He fights for Cera and earns
her trust by not giving up on her. Jorrin is the perfect guy to bring home to mom and dad. By the end of the book, you'll be falling head over heels
for him.

Varthan is an awesome bad guy that you love to hate. He does unspeakable and horrible things that makes you cringe or cry out in disgust but makes a
fantastic villain.

There is a lot of action and edge of your seat moments during the last part of the book that definitely keeps you on your toes.

If you love the fantasy genre or just love reading in general, read this book!! You won't regret it.

Sword's Call is a MUST READ!!

“Tell me about it,” Jorrin encouraged.


“I pictured our magic as a rope and wrapped it around us. I stepped into him, making us one. I concentrated and I saw you. But then I saw me, too. My eyes were closed, and I felt like I was sitting beside myself. It was…unsettling, at first. But then Trik must have moved his head, because I saw into the woods…he turned, right?”


“His eyesight is so sharp. It was a wonder to see.” Their eyes locked and held. Air ruffled her hair, causing gooseflesh to rise on her neck as a substantial breeze kicked up.


Trikser made a noise in his throat but she ignored him.


Jorrin looked so wild and beautiful with the wind in his dark hair, his high cheekbones flushed with color to the tips of his slender tapered ears. Her heart skipped as his blue eyes darkened and she read intense heat there.


Last night he’d been in her dreams. Try as she might, Cera could no longer deny that she was attracted to him. That she’d liked that kiss he stole what seemed ages ago.


Would he kiss her again? Heat crept up her neck and burned her cheeks.


The way he was looking at her right then made her lose her train of thought and her worries.


“What?” But Cera already sent the mental command. Her bond slipped off her lap with little encouragement. He’d caught sight of a rabbit, and took off after it.


Jorrin grabbed her hand and tugged forward. She fell onto his lap, moving to him instead of away, ignoring mental cautions that this wasn’t a good idea, despite her dreams, her admitted attraction.
Their lips met in heated rushed. Cera’s arms shot around his neck and she pressed closer. His body was hard against hers and a tremor shot down her spine.
Her breasts pressed into his chest as he pinned her against him. Jorrin shoved his tongue into her mouth and groaned. She clung to him, moving her mouth under his
When she touched her tongue to his, he moaned, his hands shooting down to cup her bottom.
Cera wiggled in his arms as an unfamiliar warmth enveloped her like an embrace. Jorrin’s erection pressed into her hip and she clutched his tunic with both hands.
When he kissed her harder, her head spun. Feeling his urgency, confusion rushed her. She moaned, fighting the sensation of his warmth, his strength as he squeezed her against him. Her desire for more. Her desire for him. She couldn’t lose control.
Yanking back, she panted against him.
Jorrin’s chest heaved into her breasts as they both struggled for breath. “What’s wrong?” he croaked. 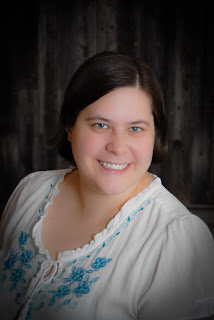 C.A. is originally from Ohio, but got to Texas as soon as she could. She is married and has a bachelor's degree in Criminal Justice.
She works with kids when she’s not writing.
She’s always wanted to be a writer and is overjoyed to share her stories with the world.

OTHER PLACES YOU CAN FIND IT!
Gypsy Shadow | Barnes and Noble | Amazon |Amazon UK | ARe|OmniLit
Bookstrand|Smashwords

Badboy, married to his job FBI agent Cole Lucas always gets his man. So when the unthinkable happens and one gets away, Cole grits his teeth and hunts human trafficker Carlo Maldonado all the way to Antioch, Texas, where he collides with Detective Andi MacLaren.
Cole doesn’t do small towns and he doesn’t get involved with women he works with, but Andi tempts him in ways he doesn’t want to acknowledge.

Two murders, her partner shot and leading the investigation on her own, the last thing Andi needs is a cocky FBI agent that sees her as no more than a tagalong.
Widow and single mother Andi is used to being on her own. When Cole gets stuck without a place to stay, crashing on her couch puts them in dangerous territory.

Attraction and passion bring Andi to a place she left behind when her husband died.
Her three-year-old son quickly wiggles his way into Cole’s heart, and he starts contemplating things—family, love—that he’d never planned for himself.

Can being forced to work together make them stronger or will their differences jeopardize their case and their hearts?

Find Collision Force on Goodreads:
http://www.goodreads.com/book/show/17379962-collision-force
Posted by Unknown at 12:30 AM