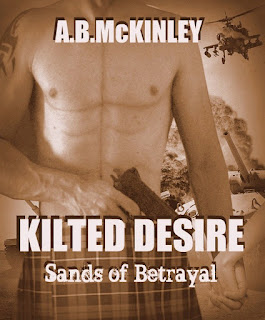 Book Blurb:
Hot passionate sex! That was the last thing on Scott Maclaren's mind as he traveled across the Atlantic to visit family. The tough Scotsman had been a Special Forces soldier until he had been terribly injured on duty in Afghanistan. Shortly after that his wife had left him for another man while he was in the hospital. But things were starting to look up, after a freak online connection he'd met beautiful Ohio schoolteacher Katie Johnson and that's when the fireworks really started. Intense passion flared between them, a love and electricity that neither of them had ever experienced before. Scott would do anything for Katie and her children including returning to the Middle East to work a six month security contract. The money was too good to ignore, this could set them up financially for life. Their enforced separation is made harder by news that his job entails him being a personal bodyguard for the devious Britney Parnell, a young attractive businesswoman who's used to getting everything she wants. She wants Scott and wastes no time sharpening her claws on Katie. This emotional erotic romance is full of action, adventure, conflict, steamy sex scenes and ultimately betrayal.

Kilted Desire, Sands of Betrayal by first time author A.B. McKinley is a wonderfully enjoyable romp through the battlefield that is love! Main character, Scott, a former member of British Special Forces, already having suffered disaster in his life, many times over, meets beautiful, single mom Katie and sparks fly. But will their love endure Scott’s next hair raising adventure? Full of steamy romantic interludes, breathtaking tension, and surprises, this book is a rip-roaring, adventure packed page turner, and a guilty pleasure for romance and adventure lovers alike. Kilted Desire is a perfect beach read, a bit like a box of chocolates… full of surprises; which lovely scintillating flavor will you pop in your mouth next? Could you use a little inspiration in the bedroom with YOUR manly man? This is a book that you MIGHT be able to get your man to read out loud to you for some fun before bed!!! All my girlfriends highly recommend page 83 for inspiration the next time a little couple’s time is imminent! I would love to hear the story touched on in the forward as well! Scott’s adventures pre-Katie were very intriguing… how did he conquer all his former obstacles to get to her? Could a prequel be in the making? I couldn’t put it down and just had to find out what happened next for Katie and Scott. Would their love survive each new roadblock? From Iraqi insurgents, to ex-husbands, to looming foreclosures, this couple’s romance is constantly under attack and in peril! Could ANY man resist 6 months in a hotel room with a beautiful woman intent on having him? Can Katie manage to overcome her financial difficulties and get that divorce so she and Scott can live happily ever after? Get the book! It’s a VERY satisfying read.

I was given this book by the author for a truthful review.

Ok so my friend and fellow blogger Diana was all insistent that I read this "Scott guy's book".  I was like CALM DOWN SISTER and give me details.  So she hooked me up with the author at the same time I found the blog hop and so here we are present day........

So I was very fascinated by a man who is taking some of his personal situations and putting pent to paper to tell about them.  It definitely had to be therapeutic for him to  write and release some of these feelings.

We meet Scott and learn about the trauma of his accident and divorce from his wife Claire.  She is such a charmer to divorce a man who has a major injury.  Anyway when then get to see Scott and Katie meet.  Their relationship is exactly what the other needs.  You can see immediately the connection they have mentally and physically *wink*.  I will say that the intimate scenes are sensual and are written about truly LOVING the person they are with.  Don't get me wrong, I love naughtiness but these were tender scenes.

Some of the choices Scott makes (like running off without discussing it with Katie) aren't what I would appreciate being the significant other of someone BUT when she finds out why he does it she is forgiving.  I do feel that he did what he needed to do for his 'family".  If he was given the choice again, I am sure he would do it again.

Long story short and so I don't spoil anything for you guys : Scott goes away and is protecting an American woman who is not in a safe area of the Middle East. Lets just say she doesn't respect the relationship Scott and Katie have and stops at nothing to try and seduce him.  I loved that Scott is a true MAN and doesn't fall into this woman's vagina .  He truly loves Katie and is keeping his eye on the prize.....a future together.

Posted by Twinsietalk at 1:00 AM