Queen of Hearts by Rachell Nichole 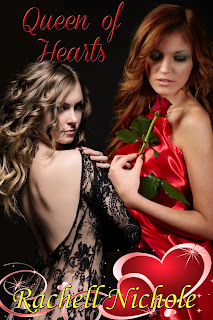 Erica Jones, also true to her astrological sign, is friendly, honest, loyal, inventive, fiercely independent, contrary, unemotional, and detached. She hasn’t found a satisfying relationship in ages, and is ready to give up on love, even though she runs a dating service.

After a one night stand, fate keeps throwing them together in the weeks leading up to Valentine’s Day. Maya offers to help Erica plan the Queen of Hearts Matchmaking event, though she doesn’t know much about dating women. Erica quickly realizes that while Maya bolted after their first night, she might be the only hope Erica has to save her business.

January 25th – three weeks to Valentine’s Day
“Has the prospect of being alone this Valentine’s Day got you down?”
Maya Cobb cringed and resisted the urge to punch the perky red-headed actress on the television. But she couldn’t seem to pry her gaze from the beautiful pale skin and smattering of freckles, or the dark peach lips.
“This year, I’ve got something special in store for you. Come to a V-Day mixer at Luc’s on Second Street, featuring the proven matchmaking skills from the Queen of Hearts herself. Cocktails, prizes, excitement, and more. For all the details, please visit our site at QoHMatchmaking.com.” The website flashed across the bottom of the screen in bright red letters as the actress spoke.
Maya’s gaze stayed glued to the screen until the last of the hearts floated away and a new commercial began. And damn if she didn’t have the urge to open her laptop and go surfing for the site. Was that the same dating site Jake had been nagging her to join? She thought it sounded familiar, but she couldn’t be sure until she asked him.
Didn’t matter, she realized as she opened the site. LGBTQ Dating, the Right Way, the header read. She closed the website, disgusted she’d actually gone and looked. Was she so desperate she’d consider joining a dating site? So what if it had worked out for Jake. It wouldn’t work for her and she knew it.
Besides, she hadn’t dated girls since college, so, Jake’s pestering aside, she wasn’t going back down that road again. If her last few boyfriends had been jealous jerks, the women she’d been with in school made these guys look like Prince Charmings. Women could be crazy. She didn’t need that kind of drama in her life. Not anymore. Besides, she wasn’t looking for Happily Ever After. And that seemed to be what Queen of Hearts was offering.
Looked like she’d be spending Valentine’s Day alone again. Not even Jake would be around to keep her company this year. He would spend it with his new beau, Adam. The two had been, in Jake’s words, “perfectly matched by the Queen herself.” As if that was supposed to mean anything.
Maya shook out her hair, trying to wrangle the thick strands into submission. She pulled it back into a poof bun and grabbed her spoon, lifting more Ben & Jerry’s into her mouth. Ignoring the tears still wetting her cheeks, she changed the channel. The “Men Are Pigs” Channel was only going to make her cry harder. You’d think after two months she would have been over what’s his-name. But being dumped the day after Thanksgiving had left her depressed as hell. Not because she’d really loved him. Not even because he’d necessarily broken her heart. But mostly because she couldn’t find a relationship that stuck. Nothing had lasted more than twelve months. It was like some kind of curse. As if the fates had decided she was destined to be alone. This coming holiday especially. Was it her fault nobody felt like sticking around after a few months? Maybe. But that didn’t mean it didn’t hurt every time one left.
She couldn’t pretend she didn’t know Ben’s name, either, no matter how many times Jake insisted on calling him what’s his name. She smiled around her next spoonful of ice cream,  remembering how Jake had helped her pick up the pieces again after a messy break-up. Again. He kept trying to convince her she needed a rebound. But she knew that was a mistake. What she needed was the thrill of the chase. She was making him take her out next weekend. Letting him pick the bars might be a huge mistake, but she needed a little excitement in her life. Deciding not to worry about it for the time being, she swiped the tears away and capped the B&J. She stuffed it in the freezer and turned off the television.
What she needed tonight was to bury herself in her work. She turned left out of the kitchen and flipped on the light to her home office. Immersing herself in work at home for the week would make it go by rapidly. And before she knew it, the hunt would be on.
Angie J's Review:

I received this book from the author for a truthful and honest review.

WOW!  This was a great, hawt, quick read.  I will say I have read many forms of erotica BUT this was my first F/F.  I loved how both of these characters showed true flaws or quirks when it comes to dating.  Maya was the girl who would do everything to push a person away because she was terrified of true love and commitment.  Erica was to busy throwing all life into her being the "Queen of Hearts" that she didn't date plus didn't believe she would ever find that one special person for herself.  I found her to be kinda funny because here she sells love but really doesn't believe in it for herself.  So anyway, the two meet at a new club and Maya sees Erica...sparks.  Maya and Erica have a pretty intense encounter that night but in typical Maya fashion she RUNS for the hills.  When Erica awakes she is a little sad because she actually enjoyed Maya.  Well the two ladies think about the other but figure they will never see each other again.....BOOM Maya walks into Erica's dating service with her best friend and they are re-connected.
Now I am leaving a BIG part of the plot out because HELLO I want you to read it.  But lets just say Erica could be in BIG trouble dating Maya if anyone finds out.....curious aren't ya.  I know you are.
I gave this book a 3.5 stars and mainly it is because I wish the book would have been longer.  I loved the book don't get me wrong!   However, at times, I wish the scenes would have been longer and not so rushed??   I think this ia a great novel and it definitely got me thinking about Valentine's Day and what the hell am I going to get my husband!!  LOL  I look forward to reading her other two novels and doing reviews on them.  You know us Twinsie's LOVE the new and upcoming authors!!!!


Hey there everyone,
Thanks for having me stop by and for the review of Queen of Hearts. I just want to share with your readers a bit more about me and my writing process. Queen of Hearts was a lot of firsts for me at once. It was my first novella, the first story I had plotted all out in my head start to finish without any plotting boards or techniques, my first lesbian romance, and my first self-published books. That’s a lot of firsts, on a very short book, in a very short amount of time! I got the idea for this book after I had started working on another book, the sequel to my first erotic romance, An Affair Across Times Square. Maya and Erica just kind of cropped up early one morning before I got out of bed. As any writer worth her salt I had some kind of paper and writing tool by my bed. Because, as any writer will tell you, we sometimes get our best ideas JUST before we fall asleep or right as we wake up. J It’s annoying as hell actually, but it’s better than being idealess. So there I was thinking about a matchmaker who couldn’t find love and a woman who hadn’t thought about dating women seriously. And the whole book just kind of fell out of my head. I knew it was a Valentine’s Day romance, I knew I didn’t want to jump into another novel-length project, because I’d just finished two novels in a short time period. I really enjoyed writing a story that was a lead-up to another holiday, especially one that is for lovers like Valentine’s Day. It was fun, flirty, and full of interesting challenges.
Thanks,


~Rach
About the Author:


I hope you enjoyed the read, Twinsie Talk and thanks again for having me. Readers, if you’d like to pick up your copy of Queen of Hearts it’s on sale now for only $2.99 at these locations…


All Romance Ebooks: http://bit.ly/XYumAN
Posted by Unknown at 12:30 AM