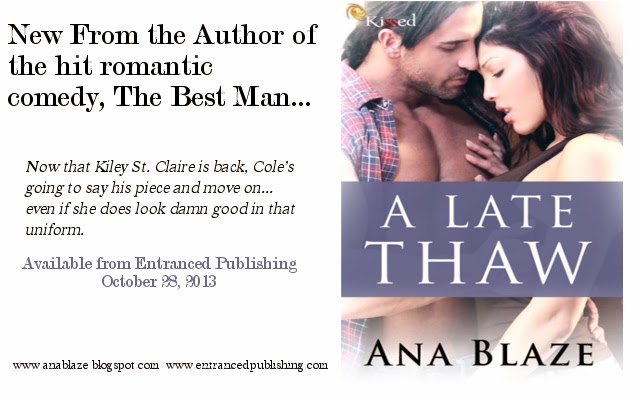 Blurb:
The town’s too small for Kiley St. Claire’s reappearance to be a surprise, still seeing her hits Cole Thomas like a punch to the gut. She ripped his heart apart when she turned to ice and ran away all those years ago. Now that she’s back, Cole’s going to say his piece and move on.
Even if she does look damn good in that uniform.
Kiley St. Claire is back in the small town of Barrett, Vermont, for one reason and one reason only: to earn some cash so she can survive her final semester of grad school. She’s not there for the sexy Christmas tree farmers.
Even the one who once held her heart.

As a blogger, I get alot of book requests for long novels which I love BUT sometimes I love the quickie novella to sit down and read.  This book fit the description perfectly.  So I jumped o jthe chance to read it.  Plus I have to admit, I am a sucker for the whole "Loved you my whole life" kinda books.

Well This story didn't disappoint.  Ky and Cole were best friends all growing up.  They both loved the other but misread actions that the other wasn't interested "that way".  When Ky comes home after being gone 2 years, Cole is MAD!!  he will not let her get away without telling he how he feels even if he is rejected, he will know he tried.

When Cole meets Ky after work at the bar, he takes he home and kisses her like CRAZY!!  Ky is stunned because Cole doesn't like her THAT way or does he....the two end up "talking" with their bodies and making it clear how they feel.  It was sweet when Cole tells Ky she is pretty.  She goes allll girlie on him.  I have to admit, I liked the quick novella and would recommend if you just want a quick read or a spicey read...either way you will enjoy!!

My favorite part of the book is this:

Cole was determined.  Kiley was meant for him.  She was meant to be his and he was meant to her hers.  If necessary he'd prove it by making love to her until they were both hoarse from shouting.  There were worse ways.

Ana lives just outside Washington DC with her very supportive husband and three rather demanding cats. She loves the ocean, Indian food, Ikea, and cooking. Ana admits to watching too much television and she swears that someday she’s going to learn how to play the guitar resting on the bookshelf in her office.