Let Me In by Michelle Lynn Promo Blitz and Giveaway 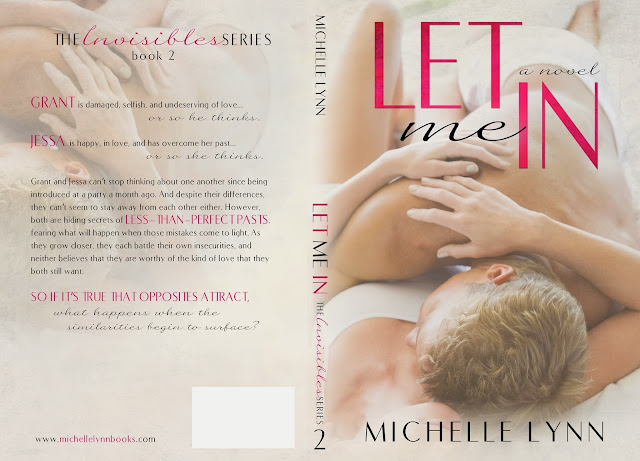 Synopsis: LET ME IN


Grant is damaged, selfish, and undeserving of love…or so he thinks.


Jessa is happy, in love, and has overcome her past…or so she thinks.


Grant and Jessa can’t stop thinking about one another since being introduced at a party a month ago. And despite their differences, they can’t seem to stay away from each other either. However, both are hiding secrets of less-than-perfect pasts, fearing what will happen when those mistakes come to light. As they grow closer, they each battle their own insecurities, and neither believes that they are worthy of the kind of love that they both still want. So if it’s true that opposites attract, what happens when the similarities begin to surface?

My mind races as I’m leaving the lecture hall. Pulling my gloves and hat on, I watch Grant’s large frame walk quickly in the other direction. How can your heart and mind be in two more different places? My heart screams for Grant every time we’re around each other, but my mind won’t let me take the step. Make that a giant leap.
The thing that scares me the most is that he doesn’t truly want it.  I can feel his desire for me throughout my whole body when he’s near, but then he pulls back just as fast. Then again, the last thing I want is to stay with Rob just for the sake of having someone.  I’m stronger than that and I know it.
Before Jason, I wouldn’t have thought twice about breaking things off with Rob and running toward Grant. Fuck Jason for making me doubt my self-worth. My therapist’s words ring in my head from my last session: ‘You have to live again, Jessa. Go, and be happy. You’ve done the work, now reap the reward.’ Dr. Hinkle was the one who convinced me to leave Boulder and start fresh somewhere else. And that’s exactly what I did last semester.
When I first met Rob, I was scared out of my mind, but I pushed forward like Dr. Hinkle said and let him in. Things were so great…at first.  He took me home for Thanksgiving and it felt as though we were really going somewhere. That he could be the one and we’d fall in love and live happily ever after. Then he and his band agreed to play Grant’s fraternity party and our relationship started to shift. Dates stopped, the swooning disappeared, and suddenly, I’m being rushed through drive-thru windows to eat and propped up against anything but a bed to fuck. 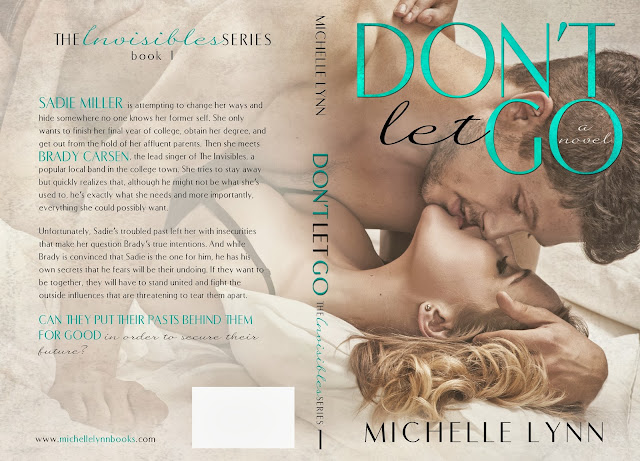 Sadie Miller is attempting to change her ways and hide somewhere no one knows her former self. She only wants to finish her final year of college, obtain her degree, and get out from the hold of her affluent parents. Then she meets Brady Carsen, the lead singer of The Invisibles, a local band popular with the college crowd. She tries to stay away but quickly realizes that, although he might not be what she’s used to, he’s exactly what she needs and more importantly, everything she could possibly want.

Unfortunately, Sadie’s troubled past left her with insecurities that make her question Brady’s true intentions. And while Brady is convinced that Sadie is the one for him, he has his own secrets that he fears will be their undoing. If they want to be together, they will have to stand united and fight the outside influences that are threatening to tear them apart. Can they put their pasts behind them for good in order to secure their future?

Author Bio:
Michelle moved around the Midwest most of her life, transferring from school to school before settling down in the outskirts of Chicago ten years ago, where she now resides with her husband and two kids. She developed a love of reading at a young age, which helped lay the foundation for her passion to write. With the encouragement of her family, she finally sat down and wrote one of the many stories that have been floating around in her head. When she isn’t reading or writing, she can be found playing with her kids, talking to her mom on the phone, or hanging out with her family and friends. But after chasing around twin preschoolers all day, she always cherishes her relaxation time after putting the kids to bed.