This book is currently unavailable in US release as an ebook.
It will be available July 9, 2013 under the name All He Wants.

Book Blurb:
Katherine Hart is thrilled to be recruited by Knight Enterprises, the most prestigious venture-capital company in the world. That is, until she makes the acquaintance of the company's infamous CEO, Dominic Knight. At thirty-two, Dominic is a self-made billionaire with a fearsome ambition and a temper to match. He is also impossibly attractive and dangerously charming when he wants to be. To Kate, Dominic seems like the perfect predator, and she resolves to be cautious despite the obvious chemistry between them, telling herself she can always leave if Dominic grows too demanding. What she doesn't know is that the decision isn't hers to make... Dominic Knight has found a new plaything, and Mr. Knight always gets what he wants 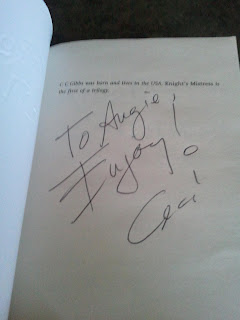 One of my FAVORITE book clips and yes it is rated NC-17!

﻿
He smiles. "Do I detect a more accommodating stance on your wardrobe this morning?"
"I'm not completely averse to being obliging."
"I like the sound of that word 'obliging.'"
"I wasn't unobliging last night, was I ?"
'No you were quite, shall we say, amenable.  I expect your breasts are tender this morning."
"Perhaps a little.  My nipples particularly.  But this dress is lined in silk so its not so very uncomfortably."
"I'm sorry. I should apologize."
"Don't. I could have said no."
And if she had, I would have stopped." Just to be clear, you can always say no.  It's only a game."
She smiled. " A very pleasurable one - awesome in fact.  Like everything about you."  She made a small moue. ' I was hoping you wouldn't be dressed yet."  He wore dark slacks and a dove grey V- neck sweater, the sleeves pushed up, his wet hair slicked back. He was barefoot.
"I'm afraid we have to leave right after breakfast."  He'd rearranged his schedule to allow him six days with Miss Hart and he had some pressing business matters to wind down this morning. "I wish we didn't.  I'll make it up to you, I promise."
"When?"
What a charming little fretful pout.  His cock twitched in recognition of Miss Hart's insatiable appetite for sex.  A quick glance at his watch; there should be time before Mrs. Hawthorn arrived. "Say in two hours?"
"Thank you" she said and smiling shyly.
He smiled an all together smile 'My pleasure."
"Thank you again.  I seem to be addicted- to constant orgasm, to the phenomenal bliss." Another smile. " I blame you."
"I willingly take responsibility. And I am more than happy to take care of your every desire."
That simple promise simply stated shouldn't make her body open in welcome but it did.  As if he'd flicked a switch and every shameless nerve breathlessly responded.  She could feel the flutter of arousal in the pit of her stomach, the damp, melting heat, the small ache of longing.
He gave he a knowing smile "Are you getting wet?"
She nodded, embarrassed and flustered. Not sure how to answer.
He crocked his index finger. "Come. I can see your nipples swelling from here." His voice took on  cool briskness. "Come, Miss Hart. NOW.'
"Be nice," she whispered, struggling to maintain some independence against his rough authority.
"Oblige me, Miss Hart," he said gently, in response to her small rebellion, 'and I'll unbutton that nice row of buttons on your dress and suck on your nipples.  Would you like that?"
With a satisfied smile, he watched her capitulate. And a few moments later, when she came to stop before him, his voice was hushed. "Very obedient.  I like that.'  He slid his fingers down the row of jeweled buttons on the bodice of her dress. "But then you want sex again, don't you?" He glanced at his watch. "Not even an hour since you came last.  We're going to have to teach you some restraint.'
"Don't" she whispered.
"Don't what?"
"don't do this to me.  Play this game with me."
Something in her voice gained his attention, her earnestness perhaps or maybe the wistfulness.  Both rare in his world.  He sighed softly. " I don't mean to be difficult,' He said, when in fact he had been, "but we have very little time.  Our breakfast will be here in ten minutes."
"Postpone breakfast. Please, Dominic?"
She'd not used his Christian name before. It startled him.  Disarmed him. "If I do,' he said, a smile beginning to warm his eyes, "you owe me."
"yes, yes." she dipped her head. "Anything."
His cock surged at the possibilities.  But his tight schedule didn't allow him to act on impulse. " I can't postpone calls to make, people waiting to hear from me." Before I disappear for six days. 'But I don't have to open the door right away.  How would that be?" He slid his finger under her chin and lifted her gaze to his. 'Would that do?"
No, she wanted to say.  But not yet lost to all reason, she nodded.
Competent and perhaps more familiar with expeditious sex then most, he rapidly unbuttoned her bodice, and gently cupped her breast in hands. "A quick orgasm to take the edge off?" With her eyes shut and her breathing rapid, he didn't wait for an answer.  Bending his head, he drew a nipple in to his mouth.
**I typed this so if there are any errors it is not a published error but my own**
Angie J's Review:
I got this book from the author for a review and man did I SQUEEE to see it was signed to me from the author.  Yup, I am a freak!!! (Honestly are any of you who know me shocked??  Didn't think so.)

Ok I literally just finished the book and text my friend to say she can borrow as long as nothing bad happens to my Mr. Knight.....yes Sara and Susan I said MY Mr. Knight!!  :)  I must say thank you to Sara and Susan for telling me about this book because I can't say enough amazing things about it.

Ok I am going to be rambling because there is sooo much I need to tell you.  First of all, if my little clip didn't get you excited, you must be dead!!  This book was the perfect mix of erotica and sarcasms with a dash of pure romance.  Mr. Dominic Knight has met his match with small town girl Katherine Hart.  She is feisty and everything that Dominic doesn't usually chase.  The world versed playboy meets his match with the stubborn Miss. Hart.  He has such a cynical view of the world that when this fresh faced woman isn't affected by his wallet he doesn't know what to do.  He is soooooo accustomed to buying his way through life and she was not having it.  She wanted him not his money.   Basically they end up enjoying a nice "vacation" together.  You see Dominic change through the book and grow as a man AND of course FREAKS OUT!! Hello he randomly decides he wants her pregnant!!! I loved how Dominic changes through the book.  He even mentally thinks about how his behavior has changed but will never ever admit to the L word...ever.  Katherine knows that this man has a frozen heart and doesn't think she can be the one to melt it.  The final chapters were heart wrenching to say the least.  My stomach was in knots plus a few stray tears ran down my cheeks.  I cannot and I stress CANNOT wait for the next book.  Mr. Knight better get some knee pads because there will be a lot of apologizes in his future for his behavior at the end of the book....and as you will soon discover when you read this amazing book, Mr. Knight doesn't do apologizes very often!!
About the Author:
This is the first book in a trilogy from this author.
She lives in the United States.
She writes under the name Susan Johnson.
Connect with her:
Facebook
https://www.facebook.com/CCGibbsUK?ref=ts&fref=ts
Twitter
@ccgibbs﻿

Buy Paperback Link:
Posted by Twinsietalk at 12:00 AM