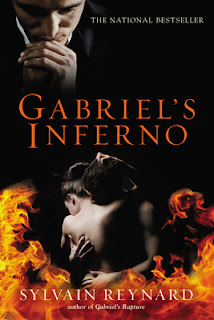 Enigmatic and sexy, Professor Gabriel Emerson is a well-respected Dante specialist by day, but by night he devotes himself to an uninhibited life of pleasure. He uses his notorious good looks and sophisticated charm to gratify his every whim, but is secretly tortured by his dark past and consumed by the profound belief that he is beyond all hope of redemption.

When the sweet and innocent Julia Mitchell enrolls as his graduate student, his attraction and mysterious connection to her not only jeopardizes his career, but sends him on a journey in which his past and his present collide.

An intriguing and sinful exploration of seduction, forbidden love, and redemption, Gabriel’s Inferno is a captivating and wildly passionate tale of one man’s escape from his own personal hell as he tries to earn the impossible—forgiveness and love.

Overall I enjoyed this book. In the beginning I wasn't sure if I would like it cause I was confused at parts but I think it's just me and I might have missed something. As the story got going though, I really liked how it all played out. One of my favorite scene's was when they had that heated argument in the classroom in front of everyone. I thought that scene was really well written and I felt like I was there. Gabriel is super hot and the ending? Wow!!!! The passion between Julia and him was intense and scorching! I also liked the fact that they were in Canada since I'm a Canadian girl. Lol!!