My Brother's Keeper by Lorrieann Russell 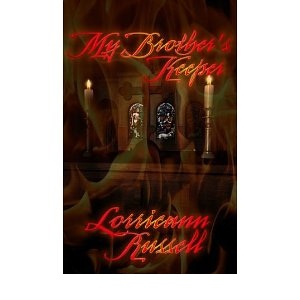 My Brother's Keeper is a fast-paced page-turner, historical fiction thriller set in 1607 Scotland that chronicles one man's attempt to bring reason to an unreasonable world.
William Fylbrigge is a young idealist who finds himself in a position to bring a voice of reason to an otherwise unreasonable world, when he is named heir to his foster father's Dukedom. Having survived a traumatizing childhood in the cruel care of his older brother and his wife, who used the witch hysteria to their advantage, William takes on the mantel of 'defender' to the wrongly accused, gaining a the reputation of 'hero' among the country folk, and 'heretic' among the clergy. Upon his marriage to the duke's daughter, William soon discovers the treacheries of life among nobles. His jealous brother, Thomas, wishing to wrest William of his inheritance, uses his outspoken reputation against him, accusing William of joining in a demonic pact, and using witchcraft, and has him arrested.
William struggles to survive the tortures long enough to prove his innocence, while fighting the demons in his own mind, and leftover scars of his childhood, but the cost of victory may be far greater than anyone could have imagined.

This was my first historical romance and I wasn't sure if I would like it cause it's not a genre that I would normally read but I surprised myself and actually enjoyed this book. I thought the character development was done really well and the story had some intense moments. Gotta love a man in a kilt. ;)

Lorrieann Russell’s writing credits include the novels My Brother’s Keeper, and In the Wake of Ashes, both independently published. By Right of Will marks her first novel with Lachesis Publishing. Ms. Russell has also written several short stories for the Writers Post Journal. She is a contributing author and artist to The Writers Post Journal.
She is a professional illustrator, and design artist and photographer. Her illustrations have appeared on book covers, magazines and calendars. An avid hiker, she takes much of her inspiration from nature, and the bulk of her photographic work is in landscape and natural settings. As an artist, her medium of choice is digital.